The online Video sharing portal YouTube had announced the introduction of a new feature to watch videos offline using their popular Mobile phone app, the YouTube Mobile. The latest feature for smartphones may be launched by November 2013, the official blog says. 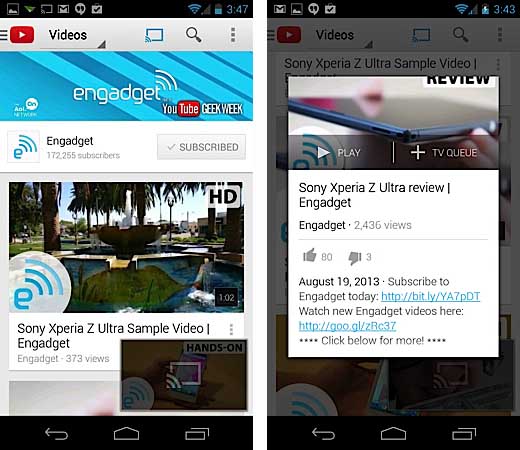 Since its inception, YouTube had always tried to stay different. The difference starts with their name itself. YouTube had tried to maintain that different taste even after Google bought YouTube from its creators. It was one among the first apps to appear in the multimedia mobile phones as well as smart devices.

The upcoming feature will allow people to add videos to their device to watch for a short period when an Internet connection is unavailable. The YouTube Team says that this is part of their ongoing updates to give people more opportunities to enjoy videos and channels on YouTube mobile.

YouTube has officially rolled out the full release of YouTube Leanback, the “lean back on your couch and watch the video” version. It is designed for 10-foot viewing on TVs. YouTube Leanback provides a simplified, less-cluttered and easy-to-personalize YouTube experience and interface. Users can search for videos, comment, list videos as favorites, and copy the video’s HTML code and embed it elsewhere on the Web. […]