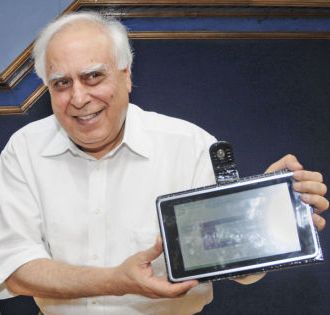 The tablet computer, known as Aakash, which translates as “before your eyes”, launched as part of a new Rs. 46 billion “National Mission for Education“. This envisages a network of laptops from which students can access lectures, coursework and specialist help from anywhere in India, triggering a revolution in education. A number of publishers have reportedly agreed to upload portions of their textbooks on to the system.

Its launching for students across the country is hoped to bring real affordable digital empowerment to people who cannot afford computing devices normally. It had started off as a Laptop under Rs. 500, then evolved to Rs. 1500 per device project. After that it became a Rs. 1600 Tablet and was set to ship in January 2011. That date wasn’t able to be kept for various reasons and a lot of skepticism regarding the project was in the air.

Kapil Sibal during the unveiling ceremony has stated that a million devices would be made available to students in 2011. The devices will be manufactured at a cost of 1500 (23 Euro) each, half of which will be paid by the government and half by the institutions that would use it.

Government(of India) announced that 10,000 (Aakash) tablet will be delivered to IIT-Rajasthan in late June and over the next four months 90,000 more would be made available at a price of Rs 2,200/device.

The price of the tablet is going to be Rs. 2,200/- and will not be available to the general public. It will be given to children in educational institutions. Government will subsidize the cost by 50%, so a student would have to pay only Rs. 1,100 for the device.

Following are the Detailed Specifications:

Sony Xperia PLAY runs the Android 2.3 Gingerbread, has a slide-out controller section and has the familiar looking PS3 control layout. The CPU in the smartphone is the 1GHz Snapdragon from Qualcomm and the device uses Adreno graphics to give high-resolution game play at 60fps. […]