CTIA [Cellular Telephone Industries Association], The Wireless Association of the USA,
commemorates the 25th anniversary of the first commercial cellular call in the United States.

On October 13, 1983, Bob Barnett, former president of Ameritech Mobile Communications placed the first commercial wireless call on a DynaTAC from inside a Chrysler convertible to the grandson of Alexander Graham Bell who was in Germany at the time. The call, made at Soldier Field in Chicago, is considered by many as a major turning point in communications. 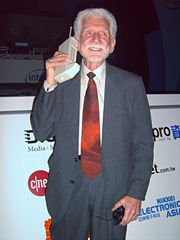 Martin Cooper, a former general manager for the systems division at Motorola led a team that produced the DynaTAC. Martin Cooper is widely credited for making the first private handheld mobile phone call in history.

Motorola DynaTAC 8000X is the first cell phone small enough to be easily carried. It was actually an abbreviation of Dynamic Adaptive Total Area Coverage. DynaTAC had only 30 minutes of talk time, could go a full eight hours between charges, weighing nearly two pounds, was 13 x 1.75 x 3.5 inches in dimension, boasted eight hours of standby time, took 10 hours to recharge, featured an LED display and memory to store thirty dialing locations. The price was some USD 3,995!

From the ‘brick’ phone of the 80’s, to today’s 3G broadband world, wireless has evolved from mere voice communication to a new era of data transmission and democratizing communications that are transforming our commerce and culture along the way.

According to AT&T, the first mobile telephone call was made on June 17, 1946 by a driver in St. Louis, by pulling out a handset from under his car’s dashboard. The team had worked for more than a decade to achieve this. By 1948, wireless telephone service was available in almost 100 cities and highway corridors in the USA. Customers included utilities, truck fleet operators and reporters. The service had only 5,000 customers making 30,000 weekly calls.

There are now more than 262 million wireless subscribers in the United States – 83 percent of the total U.S. population – and 3.3 billion active cell phones worldwide, making it one of the fastest global dispersions of any technology in history.

Today’s teens will largely drive the next wave of innovation of the cell phone. According to the CTIA- Harris Interactive “Teenagers: A Generation Unplugged” online survey released in September 2008, teens envision future wireless devices that better fit their lifestyle. Teens also have set high goals for the mobile industry and are looking to mobility to fundamentally reshape the future. Among their preferences, they want phones to guarantee secured data access to the user only (80 percent), provide accessibility to personal health records (66 percent), present opportunities to be educated anywhere in the world (66 percent) and bring users closer to global issues impacting their world (63 percent).

Mobile devices in the future will be more flexible and have more sophisticated features, the interaction between the device and the user will be even more personal and interactive, and ultra-fast mobile data service will pave the way for even more fantastic and useful applications.

Motorola has joined hands with Reliance Communications to introduce it’s newest CDMA handset W362 in South India. The phone is completely designed and developed in India at the Motorola plant in Sriperumbudur, Tamil Nadu. The […]

The Googling Videos – Google Search is Searching for You!

The Googling Series of videos from the The Vacationeers is one of the top 10 comedy groups in YouTube, with over 1,00,000 views on youtube. It is rated #1 most digged comedy video of the […]

Use SMS Text Messaging to Stop Crime in India

The SMS text messaging has gained too much popularity among the Indian youth. If you need to inform someone about an event, you prefer to send an SMS rather than calling them up. SMS stands […]