As a Symantec technician, I take remote access of at least 10 different computers every day. That means I view, control and troubleshoot the system directly which is a much more efficient way of solving technical issues as opposed to telling a customer who cannot find the start button how to delete the specific registry key without screwing up his whole installation. And about 25% of these times, I end up staring at the grand face of the Vista OS.

For the uninitiated, Vista is the latest attempt by Microsoft at selling a new operating system by looks alone. “Look at how those windows stack up so neatly in 3D when you hit win+tab!!!”. “Look at those glassy windows, woo!” and the ever popular old classic, “Look at the transparency of that menu!!!”. Frankly I don’t care if the window holding my latest blog entry looks like a glass pane or a plastic cast. What matters to me is that I don’t see a blue screen standing between my latest literary masterpiece (of sorts) and some hapless fellow’s blog that will play host to it. Anybody remember Windows 98?

Just to clear my image of any accusations of hypocrisy, let me tell you that I am writing this from Ubuntu (a Linux distro) on Mozilla Firefox (open source) using Google docs (Don’t be evil). I do not use Microsoft applications to criticize Microsoft. 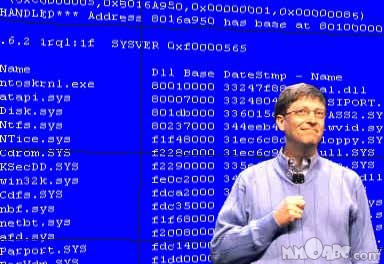 Bill Gates showcasing the most popular windows feature during a presentation. (Sorry, could not help it)! Image courtesy: gamecheats.eu

Let’s get back to the rant then. Why do I – a guest writer who ought to be flogged for having committed blasphemy by snubbing Microsoft – still hold his head up? Let me explain, one bullet point at a time, like a legitimate engineer would.

Microsoft made a ton of money by allowing PC makers to stick this label on computers that would grind under the load of Vista. Non-geek consumers mislead by this label purchased the PCs along with Vista Home Premium and was left standing with two choices – upgrade the brand new PC and run Vista, or downgrade to XP. Apparently, what Microsoft meant when it labeled PCs as “Vista Capable” was that it would run Vista Home Basic (without Aero desktop, 3D window switching or media centre PC features). What good is that?

Microsoft labeled PCs that could actually run Vista as “Premium Ready”. A whole bunch of consumers would hopefully take Microsoft to court for selling them Vista that wont work on “Vista Capable” PCs that they labeled as such.

2. Ready boost does not boost.

3. Pirates don’t want it either

Microsoft claims that Vista has been pirated only half as much as XP. Doesn’t that say a lot about the OS’s desirability? or do you still think it is all due to WGA’s superiority?

I don’t see it in Vista, do you? It was supposed to be there, right?

Imagine trying to translate your latest brainwave into a presentation while tied up in a straight jacket with a sock stuck up your throat. Yeah, now you get the general idea of what DRM feels like.

7. “For the 16,352th time, Your highness, may I have administrator privileges till I ask again in the next few minutes?”

A user on XP instructs the OS to delete a file, it confirms, it deletes. To get something done on Vista, you have to insist on it, grand the application administrator rights occasionally, write a welcome speech for the application and when it finally loads, break a coconut for good luck too.

The future is simple. Its open and free. Its Linux. Wake up!

What do you say? Would you still prefer Vista or open OS? Why?

This is a guest post by Peter Pawan EJ, a technology enthusiast living in the Linux world. If you have a tip to share, write a guest article here.

Dropbox is an online file storage upto 2GB, file sharing, online backup and file synchronizing service across your computers. All you need is to download the client software, create your user account, link your computer […]

Mumble is a free, open-source, cross-platform voice over IP application. Its primary users are gamers, and it is similar to programs such as TeamSpeak and Ventrilo. It uses a client–server architecture where users who want to talk connect to the same server. It is optimized for low latency. […]

According to Forbes’ Annual List of Billionaires, Warren Buffett, an American investor and businessman has overtaken Bill Gates as well as Mexican Tycoon Carlos Slim Helu to become the world’s richest person. Other Indians in […]