Ray Ozzie, the Chief Software Architect at Microsoft is about to step down from his current position. The move came as a surprise to many, since it is only in the last week that Ozzie announced through his blog “I’m Back”.

“Though Ozzie is stepping down from his specific title as chief software architect, he will be with Microsoft, focusing in the area of entertainment”, said Steve Balmer ,CEO, Microsoft. However, Balmer’s statement remains unclear, since there is no noticeable involvement of Ozzie with the design of Xbox and Zune – the main entertainment products of Microsoft. 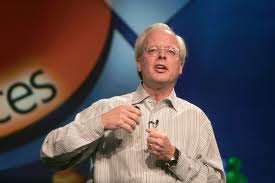 Ray Ozzie, who is 54, joined Microsoft, when it purchased Ozzie’s company Groove Networks – the creator of IBM’s Lotus Notes application, in 2005.  Ozzie had done a great role in developing the company’s cloud computing services – Microsoft Azure. Ray had always emphasized on the future technological importance of “Cloud computing”. Ozzie and Gates have earlier wrote two memos in 2005 regarding cloud computing and they described the shift towards cloud computing to be similar to the shift towards Graphical User Interface (GUI) in the 1990s.

Ray Ozzie’s move can be seen as a part of the high-level exits from Microsoft this year. The other resignation came from Stephen Elop, who left to become CEO of Nokia . Robbie Bach, Entertainment and Devices unit president and Zune inventor J Allard also announced plans to leave the company in Spring.

The full text of an internal Microsoft e-mail sent by Steve Ballmer to employees announcing the transition of Ray Ozzie, is given below. Courtesy: Microsoft News Center

From: Steveb
Sent: Monday, October 18, 2010
To: Microsoft – All Employees
Subject: Ray Ozzie Transition
This past March marked a significant milestone for the company when, in a speech at the University of Washington, I sent a message to the world that we’re ‘all in’ when it comes to the cloud. In that speech I noted that Ray’s Internet Services Disruption Memo nearly five years ago, and his work since, stimulated thinking across the company and helped catalyze our drive to the cloud.

As a company, we’ve accomplished much in the past five years as we look at the cloud and services. Windows Live now serves as a natural web-based services complement to both Windows and Office. SharePoint and Exchange have now decidedly embraced the cloud. And by conceiving, incubating and shepherding Windows Azure, Ray helped ensure we have a tremendously rich platform foundation that will enable app-level innovation across the company and by customers for years to come.

With our progress in services and the cloud now full speed ahead in all aspects of our business, Ray and I are announcing today Ray’s intention to step down from his role as chief software architect. He will remain with the company as he transitions the teams and ongoing strategic projects within his organization – bringing the great innovations and great innovators he’s assembled into the groups driving our business. Following the natural transition time with his teams but before he retires from Microsoft, Ray will be focusing his efforts in the broader area of entertainment where Microsoft has many ongoing investments. We have tremendous opportunities in the entertainment space overall, and I’m excited about what we can accomplish. Beyond that, Ray has no plans at this time. While he’ll continue to report to me during the transition, the CSA role was unique and I won’t refill the role after Ray’s departure. We have a strong planning process, strong technical leaders in each business group and strong innovation heading to the market.

While Ray will be onboard for a while, I’d like to thank him today for his contributions to Microsoft, both as a leader and as a long-time Microsoft ISV. As an early ISV, Ray contributed significantly to the early success of Windows. Since being at Microsoft, both through inspiration and impact he’s been instrumental in our transition toward a software world now centered on services. He’s always been a ‘maker’ and a partner, and we look forward to our continuing collaboration as his future unfolds. Ray has played a critical role in helping us to assume the leadership position in the cloud, and positioned us well for future success.

Please join me in thanking Ray and wishing him well.

Microsoft Office 365 for professionals and small businesses is a subscription service that work with your existing hardware. Using Office 365, small businesses can be up and running with Office, Exchange Online, SharePoint Online and Lync Online in just 15 minutes. […]

A new ‘zero-day’ vulnerability has cropped up recently in Word 2002 and Word 2003. No patch exists currently for this. This is categorized as high threat by antivirus vendors as a few viruses already started […]

Some time ago, one of my friends got a job offer from Adobe. Recently another friend got an offer from Autodesk. One of the reasons for their job changes was that they wanted to do […]