The wireless user base grew 1.07 per cent with an addition of 9.47 million subscribers, from 884.37 million in November. Overall teledensity in India reached 76.86 per cent. With this, the total number of telephone subscribers, including land line holders, touched 926.53 million. 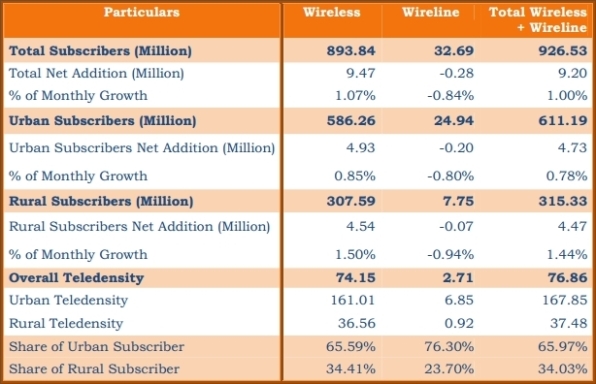 [advt]However, of the total 893.84 million wireless subscribers, only 646.77 million subscribers were active subscribers on the date of peak visitor location register (VLR). VLR is a temporary database of the subscribers who have roamed into the particular area, which it serves. Each base station in the network is served by exactly one VLR, hence a subscriber cannot be present in more than one VLR at a time.

The total number of subscribers of Idea Cellular stood at 106.38 million. Uninor added 2.13 million subscribers to take its subscribers count to 36.31 million.

TRAI to Regulate Banking and Financial Services on Mobile Devices

TRAI to regulate tariffs for banking and other financial services on mobile phones to make it affordable to the masses. The framework is intended to promote financial inclusion, including transfer of funds under various government schemes and programmes targeted to poor people. […]

TRAI proposes to retain the current 10-digit format for mobile numbers, and open up 2 to 7 series for mobile numbers. With this plan, mobile phone numbers will remain the same, and existing landline numbers will be migrated to 10-digits across the country. Currently, over 90% of the mobile numbers begin with 9 and the rest with 8. TRAI proposal will open up all levels except numbers beginning with the digit ‘1’, which will be reserve for emergency services, toll free numbers and for government-related issues. […]

as against the prevailing pulse system is facing stiff opposition from the telecom industry, according to the ToI Report. In the pulse system that India presently follows, consumers are charged for a full minute of airtime even if the call terminates before this. […]