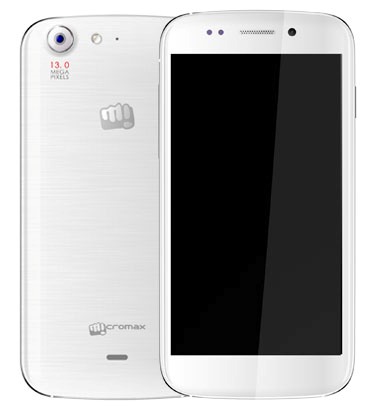 Micromax India has launched the Micromax Canvas 4,  its latest phone in its flagship Canvas series, in a live event which was webcasted. The phone carries a price tag of Rs 17,999. The company had already started the preorder of the phone days before its official launch.

It comes with a 5″ TRU-HD IPS display, with 720×1280 pixel resolution. The phone runs on Android 4.2.1 Jelly Bean OS and is powered by a 1.2 GHz Quad core processor. The Memory section is handled by a 1 GB RAM and the phone has 16 GB inbuilt storage capacity. It is expandable up to 32 GB by using microSD card.

The main feature of the phone other than the display is its twin cameras. A 13 Mega Pixel sensor rear facing camera and a 5 Mega pixel front facing camera are attached to the phone for better imagery and to ensure enhanced video calling.   The rear camera homes a five element lens. The company has also included image stabilization, multiple face detection and vertical panorama as additional functionality.

The phone is a dual SIM phone and supports dual standby functionality and is supported by a 2000 mAh battery. The phone’s packed with some interesting functions such as flip-to-mute, blow-to-unlock, auto-switch to loudspeaker mode and video pinning.

Flip to mute function works during calls. It works in such a way that while the phone rings, the user can flip the phone and the ringtone will go silent.

Blow to unlock is a funny as well as mind blowing function added to the Canvas 4, like the name denotes, whenever the phone  is locked, the user can blow some wind or literally “kiss” the phone to unlock it.

Video pinning works in such a way that, when the user is busy doing other stuff in the phone, he can simultaneously watch the video which is pinned to phone’s main screen. The user can look away from the screen to pause the video.

The phone allows the user to make calls automatically when the user brings the phone near to ear, and if the phone is flipped, it turns on loudspeaker during the call.

The connectivity sector remains pretty similar to other phones and it has WiFi, Bluetooth, GPS and Micro USB. The phone comes with a new flip cover.

Micromax india has launched its first solar phone Micromax X259. It comes with a built-in solar panel, which allows the phone to get automatically charged when exposed to sunlight. According to the company, three hours of solar charge provides 1.5 hours of talk time on the phone. […]