Lytro unveiled the first Lytro consumer light field camera, introducing a new way to take and experience pictures. Unlike conventional cameras, the Lytro light field camera captures all the rays of light in a scene, providing new capabilities never before possible, such as the ability to focus a picture after it’s taken.

The pocket-sized camera, which offers a powerful 8x optical zoom and f/2 lens in an iconic design, creates interactive ―living pictures that can be endlessly refocused. The camera is available in two models and three colors, starting at $399.

The Lytro is the only consumer camera that lets people instantly capture a scene just as they see it by recording a fundamentally richer set of data than ever before. Lytro cameras feature a light field sensor that collects the color, intensity, and the direction of every light ray flowing into the camera, capturing a scene in four dimensions. To process this additional information, Lytro cameras contain a light field engine that allows camera owners to refocus pictures directly on the camera.

[advt]When the Lytro’s living pictures are shared online, the light field engine travels with each picture so anyone can interact with them on nearly any device, including web browsers, mobile phones, and tablets—without having to download special software.

The Lytro’s sleek design was created with simplicity in mind. With no unnecessary modes or dials, the camera features just two buttons—power and shutter—and has an intuitive glass touchscreen that lets pictures be viewed and refocused directly on the camera. While the Lytro camera houses complex technology, it is fundamentally easy to use, opening new creative opportunities for anyone interested in sharing their favorite memories with friends and family.

Lytro lets you take pictures like never before. Unlike a conventional camera that captures a single plane of light, the Lytro camera captures the entire light field, which is all the light traveling in every direction in every point in space. 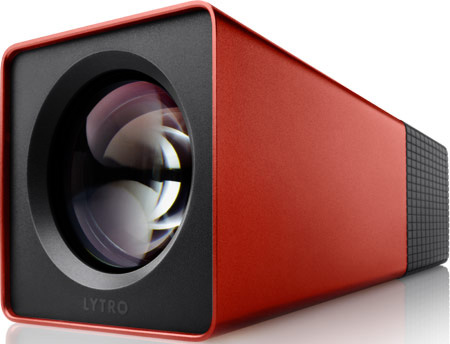 Capture living pictures with the press of a single button. By instantly capturing complete light field data, the Lytro camera gives you capabilities you’ve never had in a regular camera.

Focus after the fact.

Since you’ll capture the color, intensity, and direction of all the light, you can experience the first major light field capability – focusing after the fact. Focus and re-focus, anywhere in the picture. You can refocus your pictures at anytime.

Friends and family can explore your living pictures – having fun interacting with them like you did – on nearly any device, like your mobile phone, your web browser or your tablet.

The Lytro camera is small, light, and stunning. A great conversation piece. Which it should be, because it’s not every day you can take pictures that make history.

Intelligent design: Extruded anodized aluminum structural skin. Center of gravity shutter button. Intuitive multi-touch screen. And less than eight ounces. What does it all mean? A meticulously designed camera that’s lightweight yet solid, built for stability, and easy to use.

Speed, indeed: Light field technology translates to faster snaps. Without an auto-focus motor, the Lytro’s instant shutter means you don’t lose time focusing. Plus, with instant power on, you can capture the perfect moment – not the moment after.

Elegant omissions: What’s missing? Nothing you’ll miss. No auto-focus, no shutter lag, no unnecessary modes, dials, or settings. And no flash, because Lytro can handle many low light settings. So, no obstacles to the perfect shot.

Play with the light: Living pictures want to be let loose and roam free. When you share them from your Mac*, your friends enjoy the same interactive control as you, on nearly any device, without needing special software.

Memoto Lifelogging Camera is a tiny & wearable automatic camera with GPS which takes two geotagged photos a minute with recorded orientation. The integrated Memoto App organizes the pictures for the user. The camera constantly takes pictures as long as the user wears it. […]

Samsung Electronics had rolled out Galaxy GC 100, codenamed “Galaxy Camera [EK-GC100ZWA]” with much expectations. This is the first semi-professional camera to use Android 4.1 Jelly Bean OS. The whole system runs on a 1.4 GHz Quad core processor. The system is priced at Rs. 23,500 and interested ones can buy the device online. […]