Mangalyaan (Mars Orbiter Mission), is ISRO’s prestegious interplanetary mission to planet Mars with a spacecraft designed to orbit Mars in an elliptical orbit of 372 km by 80,000 km. Mars Orbiter mission is India’s next challenging technological mission out of the Earth’s gravitational field. The major demands will be critical mission operations and stringent requirements on propulsion, communications and other bus systems of the spacecraft. 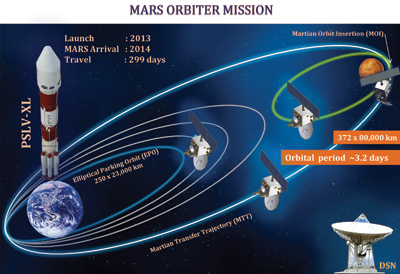 The primary driving technological objective of the mission is to design and realize a spacecraft with a capability to reach Mars (Martian transfer Trajectory), then to orbit around Mars (Mars Orbit Insertion) which will take about nine months time. Yet another technological challenge is to realize related deep space mission planning and communication management at a distance of nearly 400 million km.

The polar Satellite Launch Vehicle PSLV will be used to inject the spacecraft from SDSC, SHAR in the 250 X 23000 km orbit with an inclination of 17.864 degree. As the minimum energy transfer opportunity from Earth to Mars occurs once in 26 months, the opportunity in 2013 demands a cumulative incremental velocity of 2.592 km/sec.

An official said, “If launched within the launch window (October 21-November 19, 2013), the spacecraft will travel for least distance to reach Mars”.

This satellite will also carry compact science experiments, totaling a mass of 15 kg, as listed below. The Lyman Alpha Photometer (LAP) will look after the escape processes of Mars upper atmosphere through Deuterium/Hydrogen. The Methane Sensor for MARS (MSM) is designed to detect presence of Methane in Mars. The Martian Exospheric Composition Explorer (MENCA) will study the neutral composition of the Martian upper atmosphere and the MARS Colour Camera (MCC) will do the optical imaging of Martian surface. The TIR imaging spectrometer (TIS) is designed to map surface composition and mineralogy of Mars.

ISRO chairman K Radhakrishnan said, “The primary objective of this challenging mission is to establish the Indian technological capabilities to reach the orbit of Mars, a number of technological challenges need to be negotiated for a successful Mars mission”.

Indian Railways, with assistance from ISRO, will soon introduce real-time tracking of train locations. GPS devices would be fitted in about 100 trains, enabling the trains to know each other’s location and thus avoiding collision. This will be integrated with Google Maps as well. […]

ISRO to Launch Satellite to Link Computers in Rural India

Tech2 reports that ISRO (Indian Space Research Institute) will launch a dedicated satellite GSAT-4 in June 2008 that will connect computers in remote villages across the country for accessing the Internet and transferring data. The […]

ISRO unveiled beta version of “Bhuvan”, a web-based mapping tool like Google Earth (http://bhuvan.nrsc.gov.in/) Bhuvan promises to give better 3D satellite imagery of India than is currently being offered by Google Earth. Bhuvan has a many India-specific features like weather information, administrative boundaries of all states and districts, etc.. Bhuvan has best resolutions over the Indian sub-continent. It allows users to fly from space to street level, grab, spin and zoom down to any place. Viewers can zoom into Bhuvan maps up to 10 metres compared to Google Earth’s 200 metres and Wikemapia’s 50 metres. […]