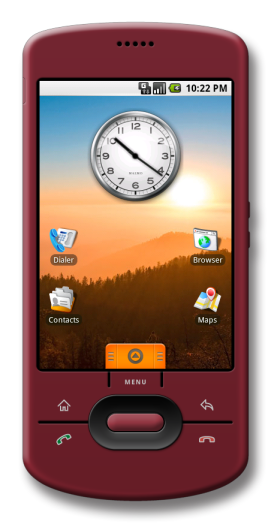 Google Android in the Android Emulator

Update: The phone is called T-Mobile G1, and the website is www.t-mobileg1.com

Google Phone have been discussed too much in the blogosphere, along with Chrome for the past few weeks. Here is the updates for the TECK.IN readers on what’s happening on the Google Phone front.

The new Google Android 3G Phone, HTC Dream (HTC Dream G1) will be officially launched Google and T-Mobile in New York on September 23, 2008. The new handset is developed by HTC of Taiwan. It is supposed to be the first commercially available mobile phone to run the Open Source mobile platform, Android.

The phone is expected to be able to run Google web applications such as Gmail, Google Docs and Google Maps, and Chrome browser. The phone comes with a dedicated YouTube button. Google may also provide additional tools such as weather forecasts, travel updates and restaurant recommendations. The phone might have a 2-year long service contract with T-Mobile.

Attendees of Google Developer Day conference were given a glimpse of how to design software for the device. If you are  mobile technology developer, you may check out the Google Android SDK and try out the Android emulator.  You may watch the YouTube video.

Will the new Android handset be in direct competition with Apple iPhone and the BlackBerry?

Evo TV is a smart device from Amkette, which can transform an ordinary TV into a smart one by providing One Click access to user’s favorite apps, social networking sites, browser and games. It has inbuilt WiFi and it comes in 3 variants. The prices starts from Rs 8,499 in India. […]

Guest post by Abhishek Mandloi, gtricks.com It has been three years since Google Talk beta was released. And even now it still in beta, as usual! If you are wondering what Google Talk team was […]