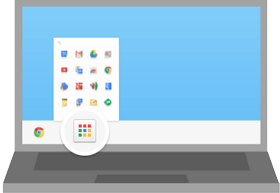 Google Chrome had unveiled a new kind of Chrome App “For your desktop”, which brings the Chrome apps to PCs. There are Office apps, Games and Creative apps in the package. At present it is available for  Windows and Chromebook, the versions for Mac & Linux will be launched soon.

The new Chrome Apps can work offline and since they can be used in the desktop, people can use the apps without being distracted by the rest of the web. Also these apps can be connected to the cloud to access & save documents, photos and videos on hard drives as well as on cloud services like Google Drive.

Users can get desktop notifications, reminders, updates and can take action on the notifications while using the apps. The apps update in the background so that all the apps will stay up to date. Chrome syncs the apps to all desktop device where users sign in.

[advt]The apps have the advantage of Chrome’s inbuilt security features like Sandboxing. The security updates automatically to have the latest security fixes. Users can launch apps directly from the desktop.

Few Chrome apps have already been listed with the “For Your Desktop” section. Some photo editing apps like Pixlr touch up to touch up, crop, resize and adjust photos with effects from PC or Google Drive. Some other creative apps included are Until.AM, The Economist, Pocket, 500px etc.

image: For Your Desktop

Last but not the least, Chrome team had added some extra entertainment in the form of games. Cracking Sands is such an action-packed 3D racing game. Also users can connect the Xbox controller via USB if they have one. Other games in the section are Tank Riders, Spelunky, They Need to be Fed etc.

KlipFolio is a personal dashboard that uses small, customizable windows called “Klips” to display all types of information, including news, weather etc, sports, blogs and RSS. Each Klip contains a list of headlines which opens in your web browser when clicked. […]

UserAssistView is a compact portable tool which can tell you more about the programs that others may be running on your PC. This utility decrypt and displays the list of all UserAssist entries stored under HKEY_CURRENT_USER Software Microsoft Windows Current Version Explorer […]