TECK.IN wishes all of you a Happy & Prosperous Onam

Onam, the national harvest festival of Kerala, is celebrated in honour of Mahabali, the mythical Asura king of ancient Kerala. Keralites believe that on Onam day Bali visits his subjects.

Today is Thiruvonam, the most important day of Onam celebrations and supposed to be the most significant for the people of Kerala. 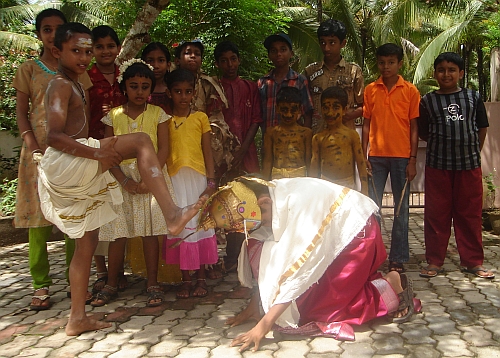 The children of my neighbourhood celebrated Onam in their own capacity. They made this street drama about the King Mahabali and Lord Vamana and sang the song “Maveli Nadu Vaneedum Kaalam, Manusharellarum onnu pole” 🙂

When Maveli, our King, rules the land,
All the peoples form one casteless race.
And people live joyful and merry;
They are free from all harm.

There is neither theft nor deceit,
And no one is false in speech either.
Measures and weights are right;
No one cheats or wrongs the neighbor.

The story goes that during the reign of the demon king Mahabali, Kerala witnessed its golden era. Every body in the state was happy and prosperous and king was highly regarded by his subjects. Apart from all his virtues, Mahabali had one shortcoming. He was egoistic. This weakness in Mahabali’s character was utilized by Gods to bring an end to his reign as they felt challenged by Mahabali’s growing popularity. However, for all the good deed done by Mahabali, God granted him a boon that he could annually visit his people with whom he was so attached.

It is this visit of Mahabali that is celebrated as Onam every year. People make all efforts to celebrate the festival in a grand way and impress upon their dear King that they are happy and wish him well.

TATA DOCOMO GSM Services has been launched in Kerala. TATA DOCOMO has come up with the pay-per-use, per-second revolutionary concept among the mobile operators in India. TATA DOCOMO subscribers will now be able to enjoy the benefits of pay-as-you-use, at only one paisa per second for all voice calls across India. The TATA DOCOMO GSM mobile service will have extensive coverage in 493 towns and cities and 516 villages in Kerala, along 890 km of the state’s highways, at airports, along 940 km of rail routes and at places of tourist interest.
[…]

Exams are over. Schools are closed for Christmas vacation. Kids are into full of enthusiasm to celebrate Christmas and the New Year. The kids in my neighborhood have been practicing Christmas carol for the last […]