One of India’s leading mobile messaging app GupShup Messenger introduced multi-lingual features for their users. These features will allow GupShup users to communicate with their followers in English and in eight Indian languages such as Hindi, Bengali, Gujarati, Kannada, Malayalam, Marathi, Punjabi, Tamil and Telugu.

“Supporting multiple languages is the most important aspect of localization and we at GupShup believe in bringing our diverse nation at one app and make the users feel at home and communicate with each other in their own mother tongue. Therefore, supporting multiple languages was a prerequisite for increasing the number of potential users, ”  said Mr. Milind Agarwal, Co-founder and Chief Community Officer, GupShup.

“We believe that it is important to serve all of the users with diverse features and simplify the user interface significantly,” he added.

On the context of delivering custom features to the users, GupShup has come up with this Regional Keyboard. The adaptability and flexibility offered by the Regional Keyboard makes it very much user friendly. 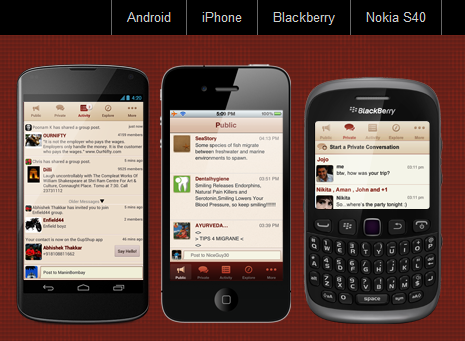 GupShup is one among the world’s top Mobile Social Network which connects users to family, friends and fans. Its users create communities and groups on topics such as finance, entertainment, lifestyle, health, sports etc. Monthly 2 billion messages are exchanged amongst its users.

GupShup enables users to send short messages in private and public modes. The service works across all platforms and can be accessed via SMS, web, WAP or mobile apps. It has over 60 million users in India.

Businesses use GupShup to acquire new customers or engage existing ones. GupShup enables brands and businesses to reach millions of users with targeted mobile messages.

How to Add SMS GupShup Widget to My Blog / Website?

SMS Gupshup also provides a widget which is ready to use in your website or blog. You can enter your group name and select a color scheme from the dropdown, and copy the generated HTML code to your webpage or blog template. […]

SMS GupShup has raised USD 12 million in Series D venture financing round. With this new financing round, the total funding of SMS GupShup comes to $37 million. The new funding will be used to expand into other markets such as the Philippines and Indonesia, for product development and to hire new staff in engineering, advertising and marketing. […]