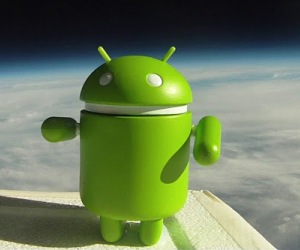 Every payload had an APRS (Automatic Position Reporting System) transmitter attached to a GPS that was known to work at high altitudes, as well as batteries for power. The remainder of each payload was different for each balloon: some had digital cameras taking pictures and some had video cameras mounted at various angles.

These Nexus S phones were running a variety of apps such as Google Maps for Mobile 5.0, Google Sky Map and Google Latitude. The Google Nexus S is the first Android 2.3 smartphone.

Here is the footage of an Android at over 100,000 ft above the Earth’s surface

The payloads were ‘manned’ with small Android robots. The payloads reached high altitudes over 20 miles (over 30 km) high. GPS in Nexus S could function up to altitudes of about 60,000 ft. The phone could withstand harsh temperatures as low as -50°C. The maximum Speed of the payload was 139 mph. View some pictures taken by the Android in space.

According to Trend Micro’s latest findings, 293,091 apps were found to be malicious and of these, 68,740 were found on the official Google Play store. It is also predicted that malicious and high-risk Android apps will hit 1 million sometime this year. […]

Use Hindi Handwriting to Search Google on Android and iOS Devices

Google had announced support for beta version of Hindi handwriting for Android. The new feature allows users to type in Hindi on a touchscreen using fingers or a stylus and the tool will recognize the characters. […]

Micromax announced a dual-operating system tablet, named LapTab. This tablet runs both Android 4.2.2 Jelly Bean and Windows 8. However users will have to reboot the tablet to switch between the two Operating Systems. It has a 10.1 inch display with a resolution of 1280 x 800. […]