Wikibooks is a Wikipedia based Wikimedia project, hosted by the Wikimedia Foundation, for the creation of textbooks with free content and annotated texts which can be edited by anyone. Earlier, the project was called as Wikimedia Free Textbook Project and Wikimedia-Textbooks. 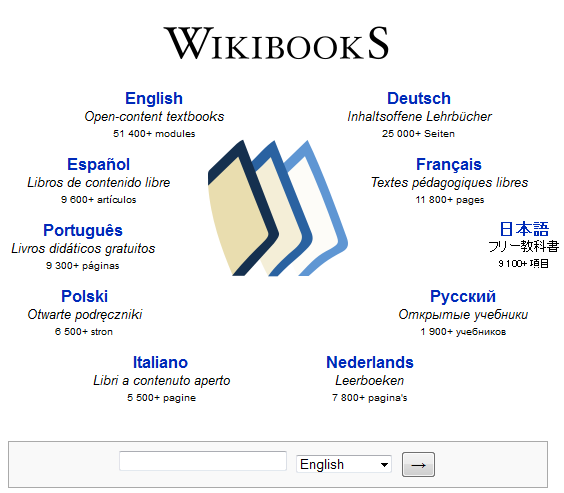 Wikibooks was launched on 2003, for a project to host and build free textbooks on subjects like organic chemistry and physics. Wikijunior and Wikiversity were the two major sub-projects created within Wikibooks. Wikiversity became an independent Wikimedia Foundation project in the year 2006.

Wikijunior is a sub project of Wikibooks, specialized in books for children. The project consists of a magazine and a website. At present, it is being developed in nine world languages such as English, Danish, Finnish, French, German, Italian, Japanese, Spanish and Arabic languages.

Some books in the Wikibooks are original, while the others were copied from other sources of textbooks with free content found on the Internet. All of the site’s content is released under a Creative Commons Attribution-Share Alike license. So the contributions remain copyrighted to the creators.

Wikibooks and Wikisource are different. Wikisource is an online digital library of free content textual sources on a wiki, operated by the Wikimedia Foundation. Its aims are to host all forms of free text, in many languages, and translations.

No registration is required to use Wikibooks. Use this link to obtain Wikibooks.

Massive Open Online Courses (MOOCs) has been formed after freely downloadable textbooks and other Open Educational Resources (OERs) were made available for students who struggle to do Higher Education. The MOOCs distributed by Coursera, Udacity and the non profit edX are only partly open. […]

Wikidroid is an android app that formats Wikipedia for your phone. It is fast and it allows you to save Wikipedia articles to your SD card for free. It has features such as full screen mode, quick language swap button, add bookmarks and home screen shortcuts to articles etc. […]

Moodle is a Free, Open Source software package for producing Internet-based courses and web sites [Course Management System (CMS)]. It is also known as a Learning Management System (LMS) or a Virtual Learning Environment (VLE). It needs to be installed on a web server to work. […]