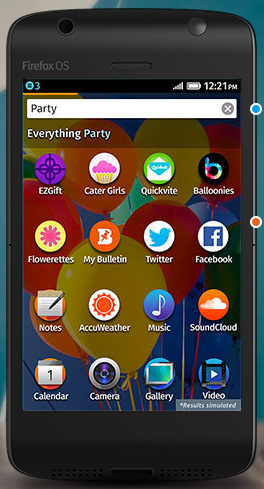 Mozilla Firefox has a name in the internet industry not because it has some browsers and internet based applications, but they have been able to serve the people with open source applications at zero cost. Now the news from their sources say that they are soon going to launch operating system for mobile phones all over the world.

The Mozilla’s official release claims that they have tied up knots with 20 hardware and operator partners; Alcatel, Huawei, LG and ZTE are the key players among them. The first Firefox OS will be available in their models, all powered by Qualcomm’s Snapdragon chipset, the company claims.

Today, Mozilla Firefox launched its first OS series in Spain, associated with Spanish mobile operator ‘Telefonica’, which starts selling Firefox OS powered ZTE Open in the spanish market. The company hopes that the main feature, the adaptive app search  technology, which enables the users to search apps in the web instead of app stores as well as cheap cost will soon help the OS to climb atop.

Firefox OS is a Linux-based open source operating system for smartphones and tablets. The OS allows HTML5 applications to communicate directly with the device’s hardware using JavaScript and open web APIs. According to Mozilla, this OS will have all the features that the smartphones normally have and some special features which the users wish to have in a smartphone.

It also includes built in social apps like Facebook and Twitter, Nokia HERE maps with offline capabilities and smart walking, driving and public transit directions, Sound Cloud, Firefox browser, Firefox market place etc. It also boasts of the ability to find One-time use and download apps. The OS features a new concept, an adaptive app search which will enable the users to find the items they need at any moment, without the need of downloading it.

The Firefox market place contains apps such as AccuWeather, EA games like Poppit, Facebook, Nokia HERE Maps, SoundCloud, Terra, Time Out and TMZ plus localized apps based on region.

According to Mozilla Chief Operating Officer Jay Sullivan, the company thinks that the launch of Firefox OS marks an incredibly exciting time for the Web. “Firefox OS powers the first smartphones built entirely on Web technologies and will stimulate an inspiring new wave of innovation for the Web, we are proud to deliver an experience for first time smartphone users that will delight them and really put the power of the Web in people’s hands,” he added.

ZTE has deployed an advanced VAS Platform for Vodafone Essar in India. With the completion of the platform, Vodafone customers can avail the Vodafone Newswrap, a Mobile Newspaper service offering the latest news and happenings from around the world, right on their mobile phones. […]

BSNL Partners with ZTE to Enhance Broadband Connectivity in India

BSNL had entered into a strategic partnership with ZTE Corporation with the aim of enhancing broadband services in the country. Under the partnership, ZTE will deploy ultra high-speed ADSL2+ and next-generation VDSL2+ broadband devices across BSNL’s network in 15 circles. […]