All of us use to save important stuff on our smart phones, like pics, videos, SMS, contacts, even Facebook messages and apps, but how can we protect them from someone who deliberately attempts to access data in our phones?

Vault is such an app, which makes it easy to fully protect your privacy. Vault for Android is a free app, which can be downloaded from Google Play Store. Even though it has a premium option, most of the app’s features are free and are available with both free as well as premium versions. 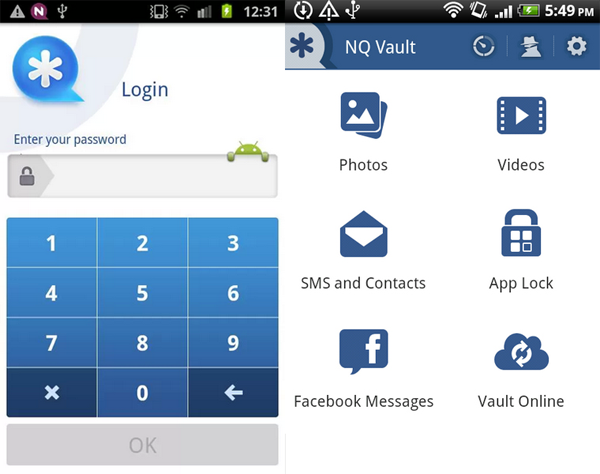 Let’s take a peek at the features that Vault offer for free. The first one is App Lock to lock Email, Facebook, Skype, Tango, Instagram, Amazon, Candy Crush or any app, with a password.

[advt]In the free version, the number of apps can be locked is limited, but in the premium version, you can select unlimited apps to lock and also enable the Camouflage App Lock to make your locked apps appear like it is crashed.

The next main feature is Photos & videos protection, which helps to encrypt all files into a private place & can only be viewed in Vault after entering the correct password. The Vault Camera will automatically secure any photo and video it takes behind Vault’s password protected album.

There’s a dashboard associated with the app, from which you can run a quick check to examine how secure your private information is and populate the result on the dashboard. The latest available release is Version 4.0.02.22, which requires Android 2.0.1 and up.

There are some extra features associated with the premium version which are Break-In Attempts, Fake Vault, Vault Online and Stealth Mode. The Break-In Attempts feature photographs anyone who attempt to break in your Vault.

The Fake vault creates a decoy vault to protect the real vault from others. The Online feature helps you backup your files in Vault and the Stealth mode allows users to completely hide Vault’s icon on the phone’s home screen.

Google launched Google Play, an integrated destination for apps, books, movies, and music for users on Android devices and to anyone on the Web. It replaces and extends Android Market and is built on the same infrastructure as Android Market and will be rolling out in OTA update. […]

Kaspersky labs had issued a statement saying that a Trojan called ‘Obad.a’ have been detected in the recent months, which targets mobile devices and is the first ever to be reported. Its being spread in the form of an Android app. Eighty Three percent of attempted infections were recorded in Russia. […]