PassMark AppTimer is a compact benchmarking tool which lets you measure how long it takes for an application to launch. This isn’t something you’d want to know every day, but it could come in useful if, say, you’ve run a system speedup utility and want to know whether Microsoft Word is now loading any more quickly.

Despite only having one main screen, setting up AppTimer can still be a little complicated. You have to locate the application you want to run, for instance, and specify a log file where the launch times will be saved. The program also needs to know the caption of the program’s window, or at least a word in the title bar.

The Windows Detection Method box tells AppTimer the point at which the timer can stop. Start by checking “Input Idle”, “Window Name” and “Visible”; this asks the program to wait from launch time, until a visible window has appeared, with the name text you’ve specified, and it’s waiting for user input.

The Window Close Method specifies how you’d like AppTimer to close the application so it can be relaunched; options are to send it WM_CLOSE or WM_SYSCOMMAND messages, or simulate an Alt+F4 keypress (or any combination of the three).

[advt]Put it all together and you could, say, have the program measure the launch time of Microsoft Word, close the program, then repeat the process for as many times as you like. Launch times after the first should be shorter, as files are loaded from the Windows cache rather than your hard drive, but this could still be a useful guide to application performance, and help you see if any speedup tweaks you might apply are having any effect. 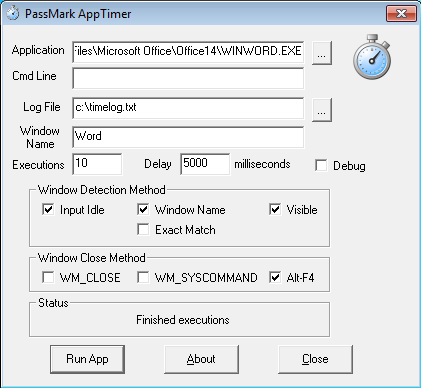 Apple’s iCloud service is online storage services can be used to synchronize photos, contacts, calendars and more between your iOS device and your Windows-based PC. Using the iCloud Control Panel you can manage your iCloud account from the Control Panel in Windows. […]

RQ Money helps you to manage credits and debts in the household, providing a quick view of the balance (by time, by category or by person). It allows budget management, multiple currencies, reports, data exporting, searching and graphs. The data is stored into an SQLite database. […]

Apple QuickTime does not aim to support every known video format, just a select few with the aim of providing the best possible output. By taking advantage of H.264 technology, the player supports a wide range of mobile formats as well as high definition, all without resorting. […]