The Maxima source code can be compiled on many systems, including Windows, Linux, and MacOS X. The source code for all systems and precompiled binaries for Windows and Linux.

The constantly updating Maxima, to fixing bugs and improving the code and the documentation.

Maxima includes a complete programming language with ALGOL(ALGOrithmic Language)-like syntax but Lisp-like semantics. It is written in Common Lisp, and can be accessed programmatically and extended, as the underlying Lisp can be called from Maxima. It uses Gnuplot for drawing. 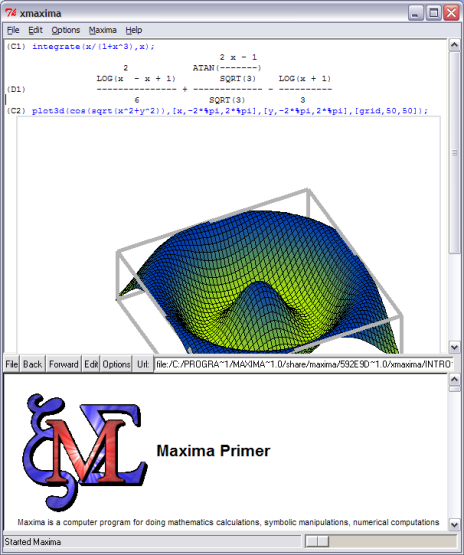 [advt]Maxima is a full-featured CAS (computer algebra system) that specializes in symbolic operations but it also offers numerical capabilities such as arbitrary-precision arithmetic: integers and rational numbers which can grow to sizes limited only by machine memory, and floating point numbers whose precision can be set arbitrarily large

For calculations which use floating point and arrays heavily, Maxima offers the possibility of generating code in other programming languages which may execute more efficiently.

Maxima is a general-purpose system, and special-case calculations such as factorization of large numbers, manipulation of extremely large polynomials, etc.

SyncBack is a flexible and quite powerful backup and synchronization program that allows to maintain backup copies of your files and folder, or to synchronize them, so that both locations always have a complete copy. It offers standard file comparison based on the date and size […]

SlimComputer is a system optimization tool with a twist: instead of downloading information about installed items from online databases, it makes use of user ratings from the Slimware Utilities community. Its configuration settings that will allow you to toggle alerts. […]

SyncPAppX is a shell script that syncs preferences between portable and local applications. It synchronizes Portable Safari, Portable Mail, Portable iCal, Portable Address Book and Portable iChat to ones on your local machine. Your local preferences will be same as Portable ones. […]