Rovio Entertainment released a brand new episode called Ham’o’ween for Angry Birds Seasons during halloween season. The new episode is accompanied by a brand new animation, and it includes a new bird character. It is available for iOS and Android devices.

The new episode features 30 levels filled with pumpkin patches, exploding jack-o-lanterns, and creepy skeletons, lit by a full moon and eerie lantern light. A brand new bird also makes an appearance — he starts out small, but looks can be very deceiving. Completing all the levels will give fans access to some special tricks and treats!

In addition to the new episode, there’s a great new Halloween animation! This spooky Halloween tale shows everyone’s favorite birds out trick-or-treating when they run into a big surprise…

Halloween wouldn’t be complete without some great costumes. Rovio is delighted to offer a special deal on Angry Birds costumes — buy two, get three! The Angry Birds store has a lot of other great Halloween products, including Angry Birds child and baby costumes. 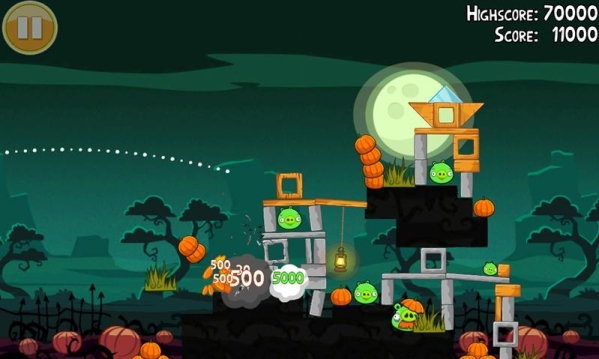 Angry Birds is a puzzle video game developed by Finland-based Rovio Mobile. Since its release over 10 million copies of the game have been purchased. It is available for iPhone, iPad, iPod Touh, Android Phones and Nokia phones. […]

Angry Birds to Nest on Facebook on Valentine’s Day

Angry birds will fly to their Facebook Nest on this Valentine’s Day. 2012 February 14th onwards Angry birds players can play their favourite game on Facebook. The basic version of the game will be free of cost, while the power upgrade can be purchased for just $0.99. […]