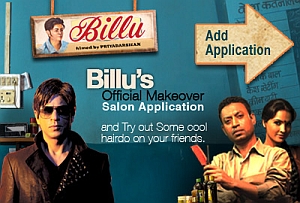 Billu, the Bollywood movie starring Irfan Khan and Sharukh Khan released last Friday, which is a remake of “Katha parayumbol” in Malayalam and ‘Kuselan’ in Tamil and Telugu, is now on Orkut Apps too!

Dosti ke Rang, Shahrukh ke Sang apps lets you find your long lost friend and if you are lucky you will have a party hosted with Shah Rukh Khan! All you have to do is Use this app, make a group, and get in touch with some long lost friends. Billu’s Official Makeover Salon lets you have your friend a virtual new hair style!