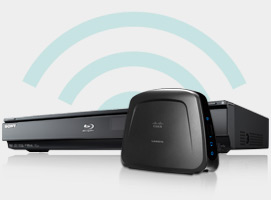 The BDP-N460 (price: USD 250) allows you to instantly stream thousands of movies, videos and music from the largest selection of leading content providers including Netflix, Amazon Video On Demand, YouTube, Slacker Radio and more. It is also Sony’s first Blu-ray machine to incorporate its Bravia Internet Video service, a collection of broadband-based video on-demand services that extends the set’s program offerings. You can enjoy the ultimate in high-definition entertainment and watch Blu-ray Disc movies in Full HD 1080p quality with HD audio.

In addition to a built-in Ethernet port, the BDP-N460 includes built-in software that makes it easy to connect this player to your existing wireless network by pairing the optional Linksys Wireless Ethernet Bridge (WET-610N), which picks up a signal from your home’s wireless router. Or you can use the built-in Ethernet port to use a wired connection.

The sets can receive a signal if the box is up to 30 feet away; but because it requires on a line of sight, the box cannot be enclosed within a cabinet; however, it will work even if the two devices do not look directly at each other, as the signal can bounce off adjacent walls.

By adding the Bravia service to a Blu-ray player, consumers can now receive the programming even if they don’t have a Bravia-equipped Sony TV. Just connect the BDP-N460 to your existing internet connection and enjoy the convenience of instant streaming.

This Blu-ray Disc player produces over 2 million pixels per frame to produce a razor-sharp picture with unmatched depth and clarity, which is 6 times better picture resolution than standard DVD. With DVD upscaling you can view your existing DVDs in near-HD quality via an HDMI connection.