Vodafone Essar launched its mobile Wi-Fi device Vodafone R201 in India. It contains a SIM slot to connect to the 3G network and five users can then connect to their devices such as computers, mobile gaming devices, digital music players to this mobile device over wi-fi to share and enjoy 3G speeds. 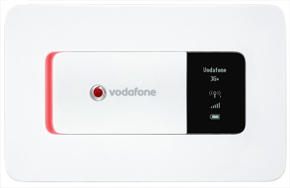 The Vodafone R201 device has a battery life of up to four hours and allows users to enjoy uninterrupted 3G internet services at a speed of up to 7.2 mbps on high-speed downlink packet access enabled devices.

Vodafone R201 is priced at Rs.5,500 in India. It is powered by battery, mains or USB along with plug and plays software of 128 MB flash memory.

The R201 can be configured to allow files from a MicroSDHC card (not included) to be shared among several Wi-Fi devices via the web browsers of the connecting devices.

The Vodafone Mobile Wi-Fi can be positioned for best mobile coverage, and then shares this coverage between devices via Wi-Fi. The R201 should not be used in a confined space where air flow is limited, for instance inside a jacket pocket or inside a hand bag etc. You will get better Wi-Fi performance when the device is being charged compared to when it is running from the battery.

Vodafone and HDFC Bank launched “m-paisa”, a mobile banking service in Rajasthan to enable millions of unbanked Indians perform basic banking transactions on their mobile phone. The companies will expand the service pan-India in a phased manner by March-April next year. […]

With no mobile phone company bagging pan-India 3G spectrum, all operators are sewing up roaming agreements with each other to retain their high-end customers. Bharti Airtel, Vodafone Essar and Idea Cellular are in the last rounds of discusssing their strategic 3G alliance. […]

Easy WiFi Radar is free software that finds and connects to open wireless access points with a single mouseclick. It will connect to open hotspots automatically and shows you exactly what it is doing in a cool animated radar screen. Access points are represented as green, yellow or red dots […]