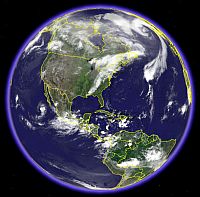 Google Earth combines satellite imagery, maps and the power of Google Search to put the world’s geographic information at your fingertips. It’s a globe that sits inside your PC! You can take a virtual tour of the Earth directly from your PC.

Google Earth has been around for 3 months. There are many applications and websites dedicated to Google Earth discussions by now.

Google Earth covers the entire globe with satellite imagery at 15 meters resolution. For most of the major US cities like Seattle, Houston, New York, Boston, Chicago, Washington DC, San Francisco, etc. you can view the images at a 6 inches while the Google Mountain View Campus is at 1 inch per pixel resolution!

Google Earth can search by city and country for the entire world; however, street-level address search is curren”tly limited to the United States, United Kingdom and Canada. Type in the City, Country name and fly to there!

You can have a visit to Statue of Liberty, Empire State Building, Ground Zero New York, NASA, Pentagon, US Capitol Building, etc..

Some people say that Google Earth is a threat to security. I read in Reuters as an India government official saying that “the issue of satellite imagery had been discussed at the highest level but the government had concluded that technology cannot be stopped. We are aware that there are websites which give detailed pictures of buildings like the president’s house including every tree in the compound.”

You may also like to see Kerala in MSN Virtual Earth. This image clearly distingushes Kerala Greenery from rest of India! Use the mouse or keyboard arrows to move around in the map.

Guest post by Peter Pawan EJ from Kochi, Kerala. How much time do spend every time you get online, just to sign in to all the web services that you use? Back in the days […]

Microsoft Corp. announced the global availability of NGO Connection, a new online resource for nonprofit groups around the world. The online resource is designed to assist NGOs to more efficiently use technology to achieve their […]