Style Jukebox is free media player software that allows users to listen music and view movie in a computer. Using this media player, users can easily organize media files that they want to play.  It shows the library of audio and video items that are currently available in the computer. Using an option called “Smart Remove”, user can remove selected list of items from the library. Another option called “Folder Watch” allows user to synchronize the items in a folder with the library of the media player.

How to use Style Jukebox Media Player?

The media player can be installed with just a few steps and requires no setting adjustment prior to its use. Once installed it searches the system disk for audio and video contents. As the scanning is over the media player displays these contents along with information like total duration, album name and rating. From this library, user can pick-up the items and create a Playlist with these items. Now user can play items within a Playlist. 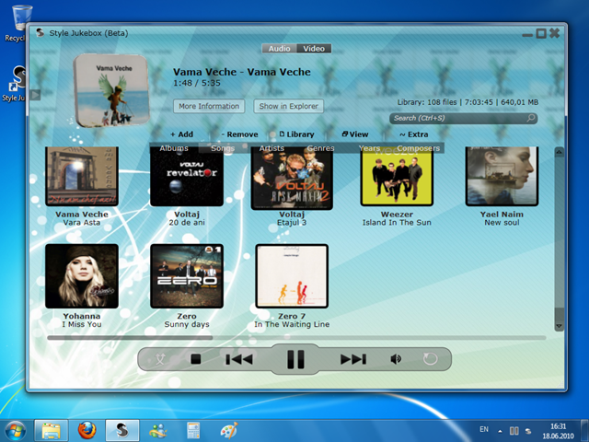 Desktop Reminder is a free reminder software that can help you to manage your to do list and tasks. When you turn on your computer, it starts working automatically and creates a list of all tasks and shows you the urgent tasks you need to do for that day. […]

Timer is an amazingly compact portable utility (7.5KB) which works something like an on-screen stopwatch. Click in the window to start it, click again to stop: it’s very easy to use. Right-click the title bar and you’ll find an option to copy the current time to the clipboard. […]

winPenPack is an Open Source project which deals with portable software, both natively portable and made portable by means of X-Launcher and can be executed without installation from any USB Flash Drive or Hard Disk. It is available online for download. […]