Leadership matters. Leaders matter. In all facets of collective human endeavor. Much, much more than what it is normally given credit for in popular culture.

Once, an assumption was that any leader was an industrial manager. He had to assemble a bunch of specialists, show them the ‘vision’, tell them what they have to do and then ‘manage them by objectives’.

Find the numbers. Show and use carrots and sticks on the ‘worker’.

What may have been true for Detroit Car makers in a particular instant in history could not be more wrong for most modern organizations and endeavors. But the exponents of this way of thinking still abound and range from George W. Bush to a pathetic manager I had who couldn’t figure out why he got torched in the 360 degree appraisal. The late Peter Drucker is intellectually responsible for a lot of failed wars and failed organizations despite, or perhaps due to, his great work. 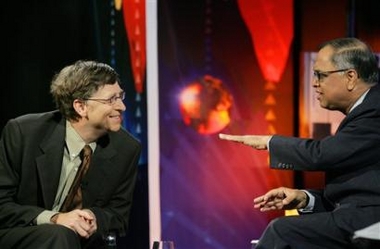 The technology industry is laden with great, good, mediocre and bad leadership. First, it is very important to distinguish the leader from the celebrity images that the media uses to sell their products. Both Steve Jobs and Carly Fiorina are celebrity CEOs. Only one is a great, proven leader. Another problem with the media obsession with celebrity leaders is that the concentration is on who they are rather than on what they actually do. We read pages after pages about Narayana Murthy’s austere lifestyle and Bill Gates’s philanthropy, but not enough about what makes them effective leaders.

In his brilliant book ‘Startup – A Silicon Valley adventure’, Jerry Kaplan recounts the relentlessness with which a young Gates tried to put his GO Corporation out of business. Using his operating system monopoly, Gates would do stuff which only someone who is tuned in to the bleeding edge of technology and is a master in the art of war could do. Admittedly, some of it was barely legal – but it does not take a brain surgeon to recognize that it is exactly what is missing from the Microsoft of today.

Someone once described to me an encounter with Narayana Murthy when Murthy completely won him over by his candor, transparency, fairness and also the ability to take a tough decision.

While very few of us ‘workers’ interact with the guys at the top, their decisions and their abilities and the lack of them do affect us profoundly, but in the long term. But, as a long dead economist said, in the long run we are all dead. The person who has a much more direct impact is that ubiquitous ‘project leader’ or whatever it is that the guy in charge of the bunch of people and their work is called. Project manager, module leader, technical lead, senior consultant are all phrases I’ve heard for people who essentially do the same job. For most people joining the industry, he is the ‘company’, despite the best efforts of the HR departments, thankfully.

The most effective ones learn quickly that there are no hard and fast rules or generic ‘policies’ which work for all in all situations except for treating everyone with a basic respect and dignity. That in fact, people are different and in fact demand to be treated differently. That the young girl from the ‘conservative family’ might as well stop working if asked to stay late while the geeky youngster is a night owl. That he has to have different ‘policies’ for these two people while being fair and perhaps more importantly, seeming to be fair. Also, he should be able to pull much more than his weight. Sadly, these are stuff on which to put ‘numbers’ is not possible.

Good leadership is underrated. And undersold.  Also, it is tough to identify due to the inherent variety in it.  One of the good comparisons of good leadership is with pornography ; it is sort of tough to frame laws to identify either but you can sorta recognize both when you see them in action. 🙂

The Halo Effect by Phil Rosenzweig

Great ideas, specific articulations of them and the books which present them transcend genres. The Halo Effect by Phil Rosenzweig who is a professor of strategy and international management at IMD, Switzerland will most probably, be always found in the business section of the bookstores around the world. It just shouldn’t shouldn’t be so as it is a book which is as genre crossing as any, which should be read by many more than the people who would browse that section and is one which will surely be judged as one of the most important business books ever written. […]

Infosys to Acquire Companies in Japan, Germany and France, But When?

Infosys Technologies is looking at acquiring companies engaged in consulting, BPO, packaged implementation services or IP-based services, in Germany, France and Japan in the price band of $200-$300 million. The effort is accelerate its non-linear […]

Flypp from Infosys is a ‘Ready to Launch’ Application platform for mobile operators. This “operator-centric” platform enables mobile operators to offer a bouquet of applications, including third party ones to its subscribers with a rich and engaging customer experience. The platform can be easily integrated into operator’s current technology environment and can also plug-and- play with their existing on-deck applications. […]