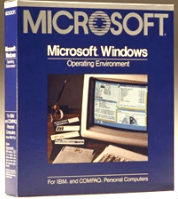 ZDNet UK reports that, it was exactly 25 years ago that Microsoft released Windows 1.0. on November 20, 1985, Microsoft Corporation officially released the retail shipment of the Microsoft Windows operating environment to dealers and distributors. Windows was originally codenamed ‘Interface Manager’ and was announced by Bill Gates in 1983. But it did not ship until 20 November 1985. The cost of Windows 1.0 was $99.

According to the the Original Microsoft Windows 1.0 Press Release:

Microsoft Windows extends the features of the DOS operating system, yet is compatible with most existing applications that run under DOS. Windows lets users integrate the tasks they perform with their computer by providing the ability to work with several programs at the same time and easily switch between them without having to quit and restart individual applications. In addition, it provides a rich foundation for a new generation of applications.

“Windows provides unprecedented power to users today and a foundation for hardware and software advancements of the next few years,” said Bill Gates, chairman of Microsoft. “It is unique software designed for the serious PC user, who places high value on the productivity that a personal computer can bring.”

Microsoft Windows will run on the IBM and COMPAQ personal computers and requires a minimum of 256K and two, double-sided floppy disk drives, and a graphics adapter card. A hard disk and 512K memory is recommended for running multiple applications or when using DOS 3.0 or later.

Apache OpenOffice is an open source office software suite for word processing, spreadsheets, presentations, graphics, databases etc, which is available in more than 170 languages and is a cross platform one too. […]

Tux Paint is a free drawing program for children ages 3 to 12. It combines an easy-to-use interface, fun sound effects, and an encouraging cartoon mascot who guides children as they use the program. Tux Paint runs on a variety of platforms as Windows, Mac OS X, and Linux. […]