MapmyIndia has introduced the CarPad 5, a 3G enabled Android tablet fully optimized for in-car and portable navigation, entertainment, connectivity and productivity. The CarPad 5 device has a large 12.7cm 1080p HD screen, 3G and WiFi connectivity. It is powered by Samsung 1Ghz processor and 8GB internal memory. It has rich app experience of Android, packed with many appealing features for car travelers.

This device comes with MapMyIndia’s latest mapping platform called Aura which features a fully 3D and GPS connected navigation experience. All the maps are pre-installed on MapmyIndia CarPad 5, making it independent of the network.

MapmyIndia CarPad 5 is loaded with all-India maps, with over 6.3 million Places of interests, national-level maps for 5,79,000 towns and villages, street-level maps for 4000 cities, house-level maps for 36 cities and 3D landmarks and building footprints for major cities. 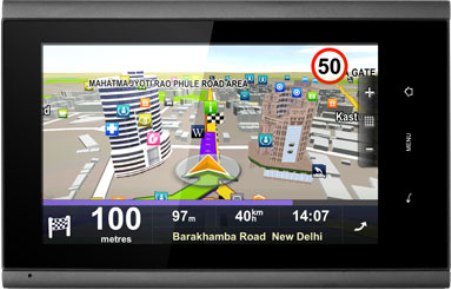 This  tablet is priced at Rs 22,990 and is available in online at MapmyIndia Store.

Karbonn mobiles added another budget smartphone to their range named Karbonn A50, priced at Rs 3,890. The phone runs on Android 2.3 Ginger bread OS and is powered by 1 GHz processor. The systems is supported by a 256 MB RAM and has an inbuilt storage of 512 MB, which is expandable up to 32 GB using microSD cards. […]

India’s first cloud based tablet solution for school children, ‘e-tutor tablet’ has been launched by a joint venture by two Kerala based IT firms. This tablet which is priced at Rs 7500, can be used by students from Class 1 to 12. It will be available in the market from April. […]