MapMyIndia announced CarPad – 7″ android tablet with 3G, navigation and car-kit. While CarPad looks like just any other Android tablet running Android 2.2 and powered by Snapdragon processor, MapMyIndia has customized it for navigation purposes. MapmyIndia’s CarPad provides navigation, entertainment, connectivity and productivity and is priced at Rs 22,990.

MapmyIndia CarPad offers everyone in the car a fully optimized in-car and portable navigation, entertainment, connectivity and productivity experience. The CarPad device has a large 7” HD screen, 3G connectivity powered by Qualcomm, and the rich app experience of Android packed with many appealing features for car travelers: 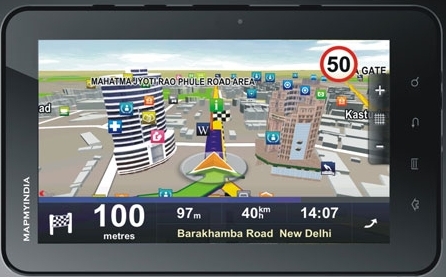 Find Everything, Go Anywhere: Experience navigation beyond your imagination on CarPad, with live turn-by-turn voice guidance to places, augmented reality with 3D landmarks, buildings and terrain, house-level details, travel guides, and nearby information and friend finders!

MapmyIndia CarPad comes exclusively pre-installed with Aura, MapmyIndia’s latest navigation interface:  With full 3D navigation and India’s richest and most detailed maps, including house numbers, as well as city & travel guides. All the maps are pre-installed on MapmyIndia CarPad, making it independent of the network. MapmyIndia CarPad gets enhanced by connectivity with streaming photographs of places, ratings & reviews that can be viewed and shared, the ability for you to discover people and friends nearby, share your location and message with others – connecting you to everyone and everything around you.

MapmyIndia CarPad is loaded with comprehensive and accurate all-India maps, with over 5 million places, national-level maps for 5,79,000 towns and villages, street-level maps for 1200 cities, house-level maps for 18 cities and 3D landmarks and building footprints for major cities.

Perfect for use in-car and on the move: You can conveniently use the CarPad while sitting in the back-seat by attaching it to the head-rest pole, and while sitting in the front-seat by attaching it to the windshield, using the bundled car-kit’s head-rest mount, windshield mount, and CarPad holder. And when you leave the car, you can carry the portable CarPad with you to use and enjoy at home, office or in a plane!

Stay connected with 3G: The CarPad adds in the powerful functionality of a complete tablet phone with 3G and Android. You can call, message, mail & chat with everyone, search and browse the web at high speed, and access social networks anywhere using the CarPad’s in-built 3G, Wi-Fi and Bluetooth!

MapmyIndia CarPad 5 is a 3G enabled Android tablet fully optimized for in-car and portable navigation. It is powered by Samsung 1Ghz processor, 8GB internal memory, with 3G and WiFi connectivity. It is pre-loaded with all-India maps, with over 6.3 million Places of interests. […]

Motorola’s et1 enterprise tablet packs a dual core 1GHz each plus graphics accelerator, 7-inch (1024×600 resolution) display, and an insanely massive 4,260-mAh battery. It runs on android 2.3.4 enhanced with enterprise functionality. It is being aimed at the business world. […]

Toshiba announced its first android tablet running on Android 3.0 Honeycomb – Regza Tablet AT300 in Japan. Toshiba will start shipping the Regza tablet in Japan in June at a price of around $730. It has 10.1″ LCD display, LED backlight, REGZA Apps Connect function, 1GB RAM, 5MP Camera. […]