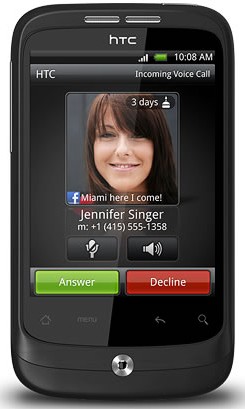 The HTC Wildfire is a  smart phone developed by the HTC Corporation, that was announced on 17 May 2010 and released in Europe in June of the same year. In India it is released in August 2010. The phone has been priced at Rs. 15,000 and is now available at your neighbourhood HTC reseller.

It is powered by a 528 MHz  Qualcomm  processor and runs the Android OS. HTC Wildfire supports built-in G-Sensor that lets you tilt the phone to control the game, adding a fresh dimension to how you interact with what is happening on screen. Plus, there are hundreds of classic and new games available for download on Android Market.

The HTC Wildfire supports an easy and intuitive music player. The music videos can be enjoyed on YouTube as well.

Picsay app enables your Photos to be spiced with text balloons, stickers and special effects and can be sen as a  personalized message to friends.

When someone calls you to your HTC Wildfire phone your Caller ID doesn’t just tell you their name and number any more – it tells you useful stuff like their Facebook status and birthday date, too.

Drag your finger across the screen to crop, resize and adjust the exposure of your photos, then share them with the world via Facebook or Twitter using  Photoshop for Android application.

Search Google Maps to find what you need. Find your way around with turn-by-turn navigation and find friends close to you with Google Latitude. My Tracks records your routes and gives you vital statistics such as speed, distance and altitude. [source]

Watch this video to know more about HTC Wildfire

i Classic is a 2.0″ Dual SIM (GSM+GSM), Dual standby QVGA Screen phone. Multimedia features include Dual Camera with Flash, FM Radio with recording, Audio player and Video Player. External memory can be expanded upto 2 GB with memory card support. This phone supports Stereo Bluetooth connectivity. The retail price of this phone in India is not available as of now. […]