HTC Jetstream is an Android 3.1 (Honeycomb) tablet that is powered by 1.5 GHz (dual core) processor. It has 10.1” inch 16M-color LCD touch screen display with resolution of 1280×800 and a battery capacity of 7300 mAh. This phone has 8 MP camera with auto focus and a front camera with 1.3MP. It has 1GB RAM and supports up to 32GB microSD. HTC Jetstream supports bluetooth and WIFI connectivity. 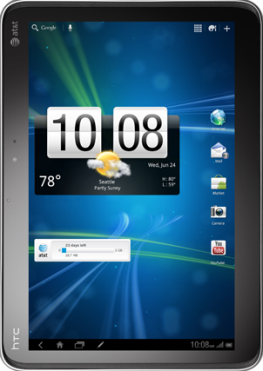 HTC Awarded “Device Manufacturer of the Year 2011” By GSMA

HTC Corporation has been honored with “Device Manufacturer of the Year” by the GSMA at its Global Mobile Awards ceremony. HTC was awarded from a list of three finalists that included Apple and Samsung. HTC previously was awarded for the “Best Mobile Phone of 2010” with the HTC Hero. […]

The HTC Touch Dual, also known by its codename, Niki (aka Nike), is a Windows Mobile-powered Smartphone in the HTC Touch family. It is designed and manufactured by HTC Corporation and was announced in October 2007 and released in November that year. The HTC Touch Dual runs the Microsoft operating system Windows Mobile 6.1 Professional, and features the ability to install others. It has TouchFLO interface, 3.5G HSDPA connectivity, […]