There are hundreds of people working 24×7 as dedicated teams to handle the reports made to Facebook. For example, when the User Operations team in Menlo Park finishes for the day, another team in Hyderabad begins their work to keep Facebook and users safe. With users all over the world, Facebook handles reports in over 24 languages.

The User Operations (UO) is separated into 4 teams to review certain report types – the Safety team, the Hate and Harassment team, the Access team and the Abusive Content team. When a person makes a “report”, it will go to the corresponding team, depending on the category. For example, if the report is about graphic violence, the Safety Team will review and assess the report.

Facebook had launched Support Dashboard which will allow you to keep track of some the reports. If one of the teams determines that a reported piece of content violates Facebook’s policies or Statement of Rights and Responsibilities, Facebook will remove it and warn the person who posted it.

[advt]Also Facebook may revoke a user’s ability to share particular types of content or use certain features, disable a user’s account, or refer issues to law enforcement, if needs. Facebook has special teams to handle user appeals when it makes a choice against user by mistake. 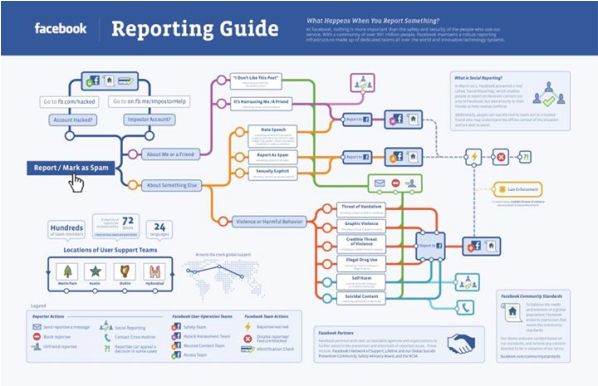 The type of contents which violates Facebook’s Community Standards are removed. But sometimes the content may be not violating the Facebook’s terms, the person who reports it still may want it removed. People reporting such content used to see no action in the past. 2011 onwards, Facebook started allowing people to engage with one another to solve their issues by simply blocking or removing from the friends list.

The UO team along with the engineers who build tools and flows to help users deal with common problems provides support to the users. On some occasions, users may lose access to their accounts by forgetting the password, losing access to the email or by having the account compromised. To provide help on such occasions Facebook have built online checkpoints to regain access. By using these Facebook will authenticate your identity both securely and quickly.

Visit Facebook if the account has been compromised. Users can make use of the Report links to let Facebook Team know about an impostor Timeline. Facebook also work closely with a wide variety of experts and outside groups. Besides their education and advisory partners, Facebook depends on the expertise and resources of over 20 suicide prevention agencies throughout the world including AASARA in India.

It is a free online Facebook to PDF converter. In this convert option you are able to write your own description on right side of your albums. You can remove unwanted pictures from your Facebook album by simply clicking on cross button, your Facebook photos are listed.
[…]

Beepl is a social site where you can ask questions, and have them answered by people who really know their stuff. It lets you ask questions that other users answer so that it’s easy for anybody to crowdsource knowledge and opinion. It also understands topics that questions related […]

Facebook Chat History Manager,save and view your chat history with friends on Facebook and can view them either online or offline. Your messages are securely stored and only person passed the security check can view saved messages. All messages are stored in your client and not on server. […]