The Twitpic founder Noah Everett launched ‘Heello’ – a twitter clone. Heello, a feature-for-feature Twitter clone, right down to the “@” symbol and the pastel tones. 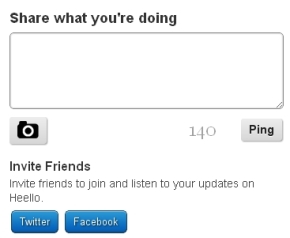 The start-up may or may not be motivated by vengeance, but it’s tough to ignore the fact that Heello was launched a day after Twitter announced its own photo-sharing service, which competes directly with third-party photo services built on Twitter’s API like Twitpic.

If Heello’s initial offering is any indication, they didn’t change much in the formula, but Everett says video and texting integration are on the way, as well as a feature called “channels” that allows listeners to be grouped together in a manner that sounds awfully similar to Google+ circles.

PingTwitter allows you to automatically update your Twitter Account when you publish a new blog post. It’s as simple as sending a trackback. When you publish a blog post, all you have to do is send a trackback using a special URL which contains your username and password information […]

twicca is twitter client for Android. Twicca boasts a very sleek UI packed with features. Like most Twitter apps, the main screen shows your home feed. Tapping on a tweet opens a menu allowing you to reply to the tweet, retweet, quote the text, open any links in the tweet etc […]

Twidroyd is the industry-standard twitter client for android and among the most used twitter applications across all platforms. it’s available as a free and commercial pro version that supports all twitter features as well as functionality that is customized to the capabilities of android. twidroyd can be downloaded on google’s android market. twidroid free version is completely free of cost and pro version which doesn’t support ad has a cost of USD 3.99 or EUR 3.30. […]