As with other mind mapping software packages, FreeMind allows the user to edit a hierarchical set of ideas around a central concept. The non-linear approach assists in brainstorming new outlines and projects as ideas are added around the mind map.

As a Java application, FreeMind is portable across multiple platforms and retains the same user interface, causing some amount of variation from the common interface on each platform. Mac users may notice the most difference from their traditional user interface, but a MacWorld reviewer says the software’s features should still appeal to the segment of users who accept function over form.

Mind map is a diagram used to represent words, ideas, tasks, or other items linked to and arranged around a central key word or idea. Mind maps are used to generate, visualize, structure, and classify ideas, and as an aid to studying and organizing information, solving problems, making decisions, and writing. 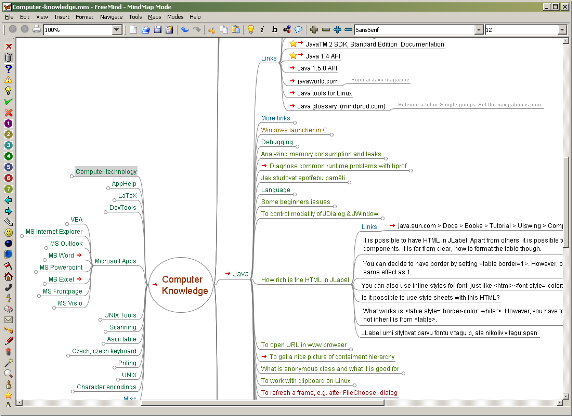 RealWorld Cursor Editor can create and edit Windows cursors, both static and animated. You can draw your cursors pixel by pixel or make them from images using a simple wizard. Images in cursors can be modified by drawing tools such as Lines, Curves, Rectangles, or Ellipses. […]

Zoundry Blog Writer is a free blogging client with features such as drop in pictures and tagging your posts. It lets you make money when readers buy through the affiliate links in your blog. It features a rich WYSIWYG blogging editor that allows you to easily compose an entry […]

Multi Commander offers a choice of single or dual panes for viewing folders, but you can open multiple tabs in each window, allowing you to create shortcuts to favorite folders that you can easily switch between for file management purposes. […]