Microsoft Visual Studio 11 Ultimate Beta ISO is a disc image containing everything you need to install Microsoft’s latest version of its IDE, complete with simplified interface, new Windows 8 development support, and a host of other productivity improvements, new language features and more.

As usual with Visual Studio, installing it will get you plenty of extras: IIS 7.5 Express, Web Deploy 3.0, Blend, Silverlight, ASP.NET Web Pages, assorted SQL Server 2012 tools, even a beta of .NET 4.5. The package can be installed alongside Visual Studio 2010, though, conveniently. And if you do have problems with any of the new components then they can be uninstalled.

Installation itself is simple. Burn the image to a DVD or mount it in a virtual drive, launch vs_ultimate.exe and it’ll begin the setup process. You’ll probably have to reboot once, but after that there’s nothing for you to do: just leave the program running until installation is complete, and then start exploring the new IDE. But if this doesn’t work for you for some reason then betas of Visual Studio Premium, Professional, Test Professional, Express and more are also available, both as ISO files and web installers via the Microsoft site. 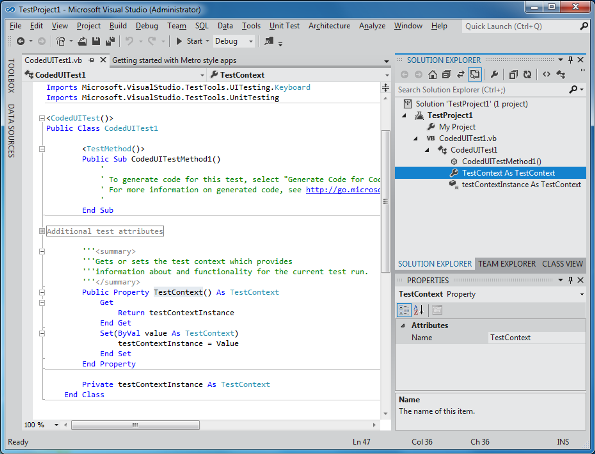 TextWrangler is a text editor for Mac OS X. It can manipulate text on your computer, you have two broad choices: a basic text editor, or a word processor. It makes no claim to provide formatting tools for improving the design of your documents; instead, it’s a fully formed […]

Bad Application is a free tool that emulates a bad application. BadApp allows you to change its process priority, start an endless loop (i.e. “hang” or stop responding) and crash its process. In addition, it can flash window and terminate the shell process – Windows Explorer. […]

NPE File Analyzer is a developer-oriented tool that allows users to view and edit Portable Executable (PE) files, such as .EXE .DLL and .SYS files. It provides functions for inspection of unknown binaries, you can analyze sections, resources, import and export tables, relocations […]