The Stanford University born ‘Cedric’ has become the first computer built entirely of carbon nanotubes. It has been unveiled to open the door to a new era of digital devices. Till now, “Cedric” is only a basic prototype but could be developed into a machine which is smaller, faster and more efficient than today’s silicon models. 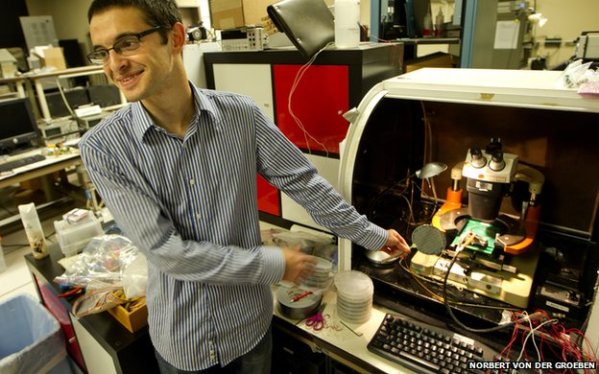 Cedric is the most complex carbon based electronic system till now. Cedric has a 1 bit processor with a speed of 1 kHz. It carries 178 transistors and each transistor contains 10-200 nanotubes. There are 2 billion carbon atoms together constructs all these tubes. It has the ability to do multitasking.

[advt]The computer operates on just one bit of information, and can only count to 32. In principle, it could be used to solve any computational problem. It runs a basic operating system which allows it to switch between two tasks – for example, counting and sorting numbers. Unlike its predecessors, Cedric gets the answer right every time.

The Carbon nanotubes have some properties which make them ideal as a semiconductor material for building transistors, the on-off switches at the heart of electronics. CNTs are so thin that thousands could fit side by side in a human hair. So it needs very little energy to turn off.

[advt]The Stanford team built chips with CNTs which are 99.5% aligned – and designed an algorithm to bypass the remaining 0.5%. A small fraction of CNTs always conduct electricity, instead of acting like semiconductors that can be switched off. The Stanford team call this technique as “imperfection-immune design”.

The Raspberry Pi Foundation of UK have developed an ultra-low-cost computer, for use in teaching computer programming to children. It is about the size of a USB key, designed to plug into a TV or be combined with a touch screen for a low cost tablet. The expected price is $25. […]

ZDNet reports that, Microsoft will show off its spherical Surface computer next week during Microsoft’s annual Research Faculty Summit in Redmond. Microsoft had announced the development of Microsoft Surface more than a year ago. Microsoft […]

HCL Infosystems recently announced MiLeap Laptops – fully functional, portable range of laptops with a starting price tag of Rs 13,990. MiLeap X is claimed to be the world’s cheapest ultra-portable laptop. The series is […]