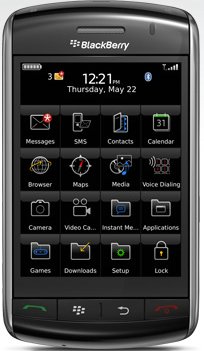 The BlackBerry Storm 9500 Touchscreen Smartphone will be available in India soon (within a month?) for Vodafone customers.

BlackBerry Storm 9530 will be available to Verizon Wireless customers in the USA in this fall season. They will benefit from the reliable high-speed 3G Evolution-Data Optimized (EV-DO) network of Verizon Wireless.

BlackBerry Storm is the first touch-screen based BlackBerry smartphone.

The user distinctly feels the screen being pressed and released with a gentle click, similar to the feeling of a key on a physical keyboard or a button on a mouse. The clickable touch-screen gives the user positive confirmation that they have made a selection and the result is a dramatically enhanced touch interface and a highly-intuitive typing experience.

The new BlackBerry Storm adds support for multi-touches, taps, slides and other touch-screen gestures, so customers can easily highlight, scroll, pan and zoom for smooth navigation.

The BlackBerry Storm smartphone also features a built-in accelerometer, allowing its touch-screen to automatically switch between landscape mode and portrait mode as the user rotates the handset.

Provides full HTML high-performance browser that works in either portrait or landscape orientation. Users can just double tap on the touch screen to zoom in and slide their fingers to scroll and pan. Icons along the bottom of the display allow for quickly accessing Web sites. The enhanced browser supports file downloading, streaming audio and video (RTSP), and with its built-in RSS support.

The built-in mobile streaming capabilities on the BlackBerry Storm smartphone are designed so that you can watch online clips like these or even listen to streamed music broadcasts.

According to survey findings from Nielsen’s, about one of every seven American households (15%) owns at least one smartphone. The top mobile phones of the year are topped by the iPhone 3G, BlackBerry Curve, and Motorola RAZR. […]

The Acer Tempo F900 gives total control over web browsing on the go. With a 3.8-inch WVGA touch screen and new easy-to-use touch keyboard, the F900 is able to display more information on screen while offering an excellent mobile browsing experience. The F900 is the perfect solution for stylish Internet connectivity anywhere. Acer Tempo F900 lets you browse and interact with the web as easily as you do in your office or at home. […]