End consumers can now enjoy their favorite Android apps on Windows PCs. Android apps can appear either as icons on the Windows desktop, or within a full-blown Android environment.

BlueStacks helps PC manufacturers to ride the Android momentum by enabling Android apps on x86-based tablets, netbooks, notebooks, convertibles and AiO Windows PCs. With the new hybrid convertible form factors, BlueStacks completely eliminates the need to carry two devices. The end consumer benefits from getting both Android and Windows at the price of a single PC.

[advt]BlueStacks integrates seamlessly with Citrix and Microsoft software delivery infrastructure and with Citrix’s Enterprise App Store. With BlueStacks, enterprise IT can deliver Android apps securely and effortlessly to any end point running Windows.

The seamless user experience, simultaneous use of Android and Windows apps, and multi-touch enablement are built on ground breaking virtualization technology which requires zero configuration and is transparent to the end consumer.

BlueStacks runs Android and Windows simultaneously and seamlessly on PC devices. The technology can be integrated into offerings for both the consumer and commercial (enterprise) market segments.

End users can access one of the largest collections of free and paid Android apps from Amazon’s AppStore by logging in with their Amazon account credentials or by creating a new account if needed. Apps purchased from Amazon can be shared across multiple PC and phone devices. 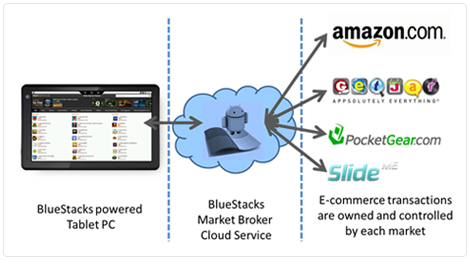 In addition to Amazon, BlueStacks also supports app stores like GetJar and SlideMe through the “Apps” broker service. The “Apps” broker connects to multiple app markets to allow end consumers to search, download and install certified Android apps. All apps featured in the “Apps” broker are guaranteed to work on Windows PC devices.

Enterprises have embraced Android as the new platform for mobile applications. Many of the legacy applications like internal sales tools and in-care patient service tools are being rewritten for the Android platform.

Enterprises are now faced with many dilemmas in using these Android applications:

BlueStacks enables the work force to start using Android apps and eliminates the need to provide a new Android tablet in addition to the standard issue Windows PC. Android application “apk” can be easily converted into a standard “msi” package and then distributed and managed with Microsoft Systems Center and Citrix Receiver.

BlueStacks integrates seamlessly with the Citrix Receiver to schedule automated delivery of Android apps to Windows desktops and enables self service for the end consumer, who can download Android apps of their choice from the Citrix Enterprise application store. In addition, since BlueStacks is able to share data with the Android applications, all the data can be retained in the Windows environment where it can be encrypted and stored securely with the enterprise policies applied to it.

At the heart of BlueStacks is a multi-OS runtime with breakthrough virtualization technology. Apps developed for different operating systems can execute simultaneously, side-by-side, on the same computer.

BlueStacks employs a lightweight, optimized, soft hypervisor with deep enhancements to support “embedded virtualization”. End consumers can enjoy the full Android environment through BlueStacks, or just install Android app icons directly on the Windows desktop. As is the case with any advanced technology, the complexity is completely masked from the end consumer.

The BlueStacks user interface is fully configurable. In addition, BlueStacks can integrate with the custom software experiences designed and developed by PC manufacturers. 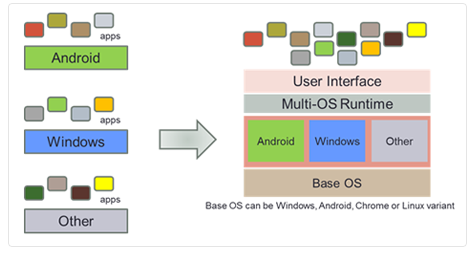 The current release of BlueStacks supports Android running on Windows. As the architecture diagram indicates, the BlueStacks virtualization technology can very easily support different permutations and combinations of operating systems and their applications. Some examples include:

• Android on Chrome OS (for x86): Run Android apps in a browser tab to augment the app experience in Chrome OS

Have you ever wanted to customize the Android robot? Androidify yourself by customizing the little green Android as yourself, your family, your friends, or anyone. You can stretch it, shrink it, add a hoody, style its hair, add some shades, or give it a parrot and a pirate hat. […]

UltraDefrag is the first open source disk defragmenter for Windows which supports defragmentation of locked system files by running during the boot process. The primary goals are doing the job fast, reliable and achieve the best results. It is free software and it defragments system files […]

Neverball is a 3D platform game similar to Super Monkey Ball. It is currently available for Windows 2000/XP, Mac OS X, Linux. Neverball is free software under the terms of the GNU GPL. Neverball is part puzzle game, part action game and entirely a test of skill. […]