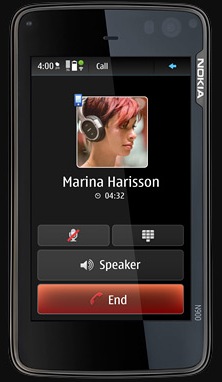 Running on the new Maemo 5 software, the Nokia N900 empowers users to have dozens of application windows open and running simultaneously while taking full advantage of the cellular features, touch screen and QWERTY keyboard.

The Nokia N900 encloses a powerful ARM Cortex-A8 processor, up to 1GB of application memory and OpenGL ES 2.0 graphics acceleration. Nokia N900 provides multitasking, allowing many applications to run simultaneously. With N900, switching between applications is simple. The panoramic homescreen can be fully personalized with favorite shortcuts, widgets and applications.

The Nokia N900 features a high-resolution WVGA touch screen and fast internet connectivity with 10/2 HSPA and WLAN. The browser is powered by Mozilla technology. The Nokia N900 has 32GB of storage, expandable up to 48GB via a microSD card. For photography the N900 come with a 5MP camera and Carl Zeiss optics. The N900 has full physical slide-out QWERTY keyboard. You can setup upto 10 personal email accounts with Nokia Messaging service.

Maemo is an advanced Linux-based mobile operating system designed to run on high-end Nokia mobile computers. Being an open-source platform, it enables the Maemo community to freely modify and continually develop software to bring added value to all Maemo users. 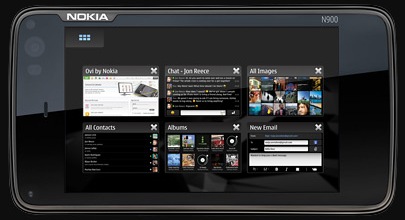 Maemo is an open platform that runs on open devices. It has Linux at its core, but Maemo also has plenty of other software components maintained by communities of open-source developers. The platform is based on well-known technologies that are widely used in the free software community. Best of all, you can benefit from the work done by other developers as soon as you take your Maemo device out of the box.

The principle guiding the development of Maemo is that it will always remain a truly collaborative effort. Maemo was not simply created by a small group of Nokia engineers. Instead it has required the creative talents of the wider developer community over many years. The Maemo creative team is bigger than you might think: over 19,000 members working on more than 800 projects. And this number is growing all the time. In the future, the aim is to make Maemo.org a creative hub that enables users, developers, and designers to
openly collaborate on all things Maemo.

“With Linux software, Mozilla-based browser technology and now also with cellular connectivity, the Nokia N900 delivers a powerful mobile experience,” says Anssi Vanjoki, Executive Vice President, Markets, Nokia. “The Nokia N900 shows where we are going with Maemo and we’ll continue to work with the community to push the software forward. What we have with Maemo is something that is fusing the power of the computer, the internet and the mobile phone, and it is great to see that it is evolving in exciting ways.”

Designed for computer-grade performance in a compact size, Maemo complements Nokia’s other software platforms, such as Symbian, which powers Nokia’s smartphones.

DVD Flick aims to be a simple but at the same time powerful DVD Authoring tool. It can take a number of video files stored on your computer and turn them into a DVD that will play back on your DVD player, Media Center or Home Cinema Set.It supports additional custom audio tracks. […]

Bloove is a web-based mobile phone management service – you can edit your contacts and speed dial settings, initiate calls and work with SMS from your favorite browser. With Bloove, you can backup SMS messages in Symbian phones and backup log in Nokia S60 phones. […]