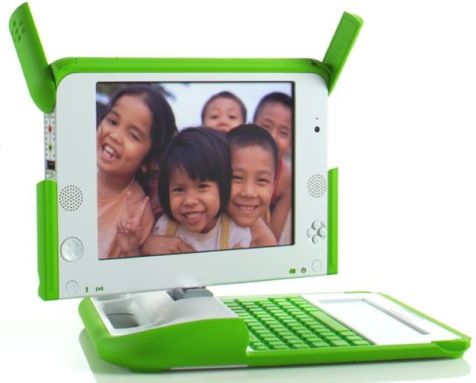 In the beginning, there was the dream. The dream of creating a laptop that would sell for $100, that would enable all the economically backward third world citizens to connect to the rest of the world and tap into the information highway. If it smells like philanthropy, read on…

From a business perspective, the target demographic was practically an ignored market, naive and wide open to online services. The original plan to reduce the price of the laptop’s price to $100 was to create special ‘function keys’ on the laptop that would connect to online services and lease it out to the big dotcom corporations for a price. I, personally have blown my mind trying to imagine what kind of service a huge dotcom would manage to sell to an impoverished farmer in Nigeria who received the laptop as a gift from some humanitarian organization. The dotcoms probably thought along the same line since it never happened. What did happen, was the OLPC project.

Its making headlines, and if you had not been in a coma for the last one month you probably already know that the One-Laptop-Per-Child (OLPC) project has finally taken off to a shaky but sure start. Its final design has gone into production and the ‘give one – get one free’ offer seems to be doing pretty well. Although at $188, the price is higher than the targeted $100 and ignoring the fact that among the seven countries that initially signed up for the laptops, only Uruguay is buying them right now, you could say that the project is running fine – until now, that is. 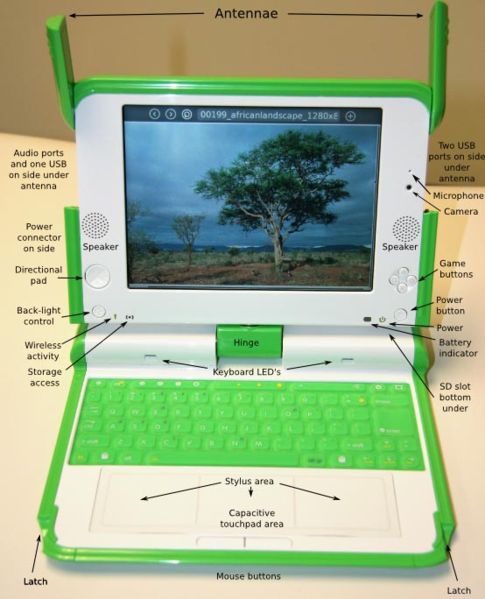 Apparently Microsoft just woke up to the probability that it would eventually be replaced from having the most popular operating system in the world if it let the OLPC laptops ship without windows in it. All throughout the design and development of the OLPC XO, it was assumed that Linux would be the OS of choice, and for obvious reasons. First of all, Linux is open source and more importantly, free. A windows license for PC alone costs almost as much as an OLPC laptop. Secondly, to reduce the cost of the laptop, OLPC is shipping it with only 1GB of flash memory and no hard drive. It doesn’t take an engineer to figure out what would happen if you tried installing Windows XP on just 1GB of disc space. Try imagining swallowing an elephant alive and you have a pretty accurate picture of the installation process.

A few days back, Microsoft gave out one bombshell of a press release saying that it will be ‘adapting’ windows to run on the OLPC laptop. Knowing Microsoft, adapting Windows to run on a particular piece of hardware has never happened in the history of Microsoft and I don’t think it ever will. The usual procedure – as we see happening with Vista right now – is to create an operating system that will run only on a system that is powerful enough to replace a conventional mainframe and then force the hapless customers upgrade their hardware. So being the skeptic that I am, I waded through page after page of information to finally figure out how Microsoft is going to ‘modify windows’ to make it fit into an OLPC laptop. Microsoft is going to add a 2GB internal SD card to increase the memory – and consequently, the price – of OLPC XO. Beautiful, just the kind of innovation I have come to expect from Microsoft.

And since the current Linux implementation works just fine in the available memory, the question that remains to be asked is why take all this trouble to go the Microsoft way? When I come to think about it, there is one more question. What do you do about the security issues of running an ad hoc wi-fi network on Windows? Maybe Norton will adapt their software, I will let you guys know.

This is a guest post by Peter Pawan EJ, a technology enthusiast living in the Linux world. If you have a tip to share, write a guest article here.

ControlPad turns the numeric keypad on your keyboard to a Windows command execution system. You may configure any numeric code to: Execute any program, open any document, open any web address or send any series of keystrokes to the operating system. […]

Olive Telecommunication has launched India’s first ever range of Zipbooks, the 3G Embedded Netbooks, which provides a truly anytime anywhere mobile broadband solution. The notebooks are powered by Qualcomm’s QSC6085 chipset and support EV-DO. The notebooks runs on Intel Atom N270 processor, with 1-GB DDR2 memory, 160-GB HDD and weighs only 1.3 kgs. The notebook runs Windows and is Wi-Fi enabled. […]