According to the study, an equal number spend up to an hour on social networking and email. However while just 8 percent spend between an hour and three hours on personal email, 20 percent spend the same time on social media sites.

The study was conducted through on an online survey on a sample population of 2000 people from all walks of life spread across top five metros and Tier 1 cities in India.

“Social media is now ingrained in the way tech savvy Indians live their lives. With its ability to play multiple roles in an individual’s life by enabling shared experiences, creating linkages between communities and satisfying the need to be networked, its role in creating a deeper engagement is a boon to marketing.”

“The social web appears to have gone beyond supplementing communication. Online Indians today are using social media to facilitate activities that range from leisure like entertainment, improving their livelihood through job searches and researching prospective partners.” 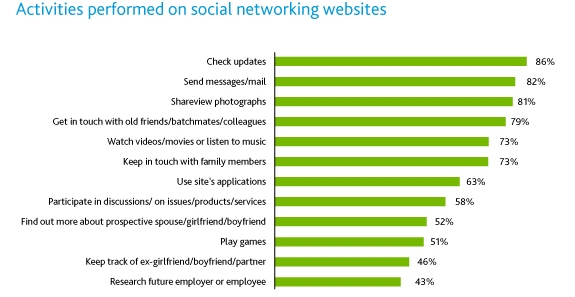 What Social Growth Means for Brands in India

[advt]Social media is also gathering momentum rapidly. Based on the current rate of growth and the intention of online Indians to participate in social media, the study estimates that over the next six months 45,000 online Indians intend to join social networking sites each day.

When asked about the awareness of brands on social media, a fourth of online Indians were able to recall brands using social media. Of those consumers who are on social networking sites, a small but growing number claim to be following brands on these platforms. 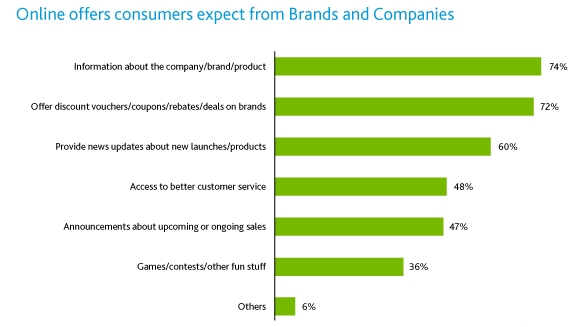 Brand engagement through social media on the rise

Nearly 40 million Indians are using online reviews to inform purchase decisions – 67 percent of Indians who are on the web use online reviews to help them make purchases. As personal opinion gains currency on the social web, online users are seeking various outlets to express themselves, be it blogs or social media sites.

Increasingly, Indians also want brands to communicate with them using social media. 60 percent Indians who are social media users are open to being approached by brands indicating that social media has the ability to change the dynamic between brands and consumers who are typically time-starved and may consider traditional forms of advertising obtrusive and undesirable.

This emerging behavior points to the fact that brands need to deliver on consumer expectations much more than ever before, in a world where consumer opinion and brand advocacy, or criticism propagates through social networks much faster than ever before.

Wadja.com, a unique social networking site that uses labels to create people-to-topic connections, has created a developer’s platform, which allows SMS providers to offer their services to an audience of over 5 million registered users. […]

Facebook to reach 1 billion users by 2012, according to statistics site Social Bakers. Eventhough US holds the number one country spot with over 149million users, the fastest growth is coming out of Brazil. The social networking star has sustained this growth rate since September 2009. […]

Wadja.com has created a developers platform, which allows users to create applications that run inside Wadja. These can be anything from games to new features on the site or the provision of SMS. With the Wadja Developer API you can get a basic application – Flash Games, SMS apps and any other kind of application – up and running in minutes and available to over 5 million users. […]