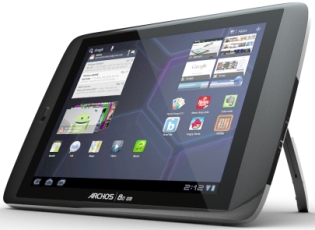 You can choose between a flash model or one with a 250 GB hard Drive. The Hard Drive models are only 3.0 MM thicker and about 4 ounces heavier.

It supports Wi-Fi connectivity with the ability to add a 3G stick for access. It is standard looking 3G USB stick that you can also use with your Mac or Windows PC. What makes it really slick is that it is designed to slide right into a custom slot. When installed, you won’t even know it is there (except for the wireless access).

Racing ahead of the pack: Whist most current generation Android tablets are using a 1 GHz dual-core nVidia Tegra 2 Processor, ARCHOS decided to push their G9 tablets even further by loading them out with Texas Instruments OMAP4 dual-core processor at up to 1.5 GHz dual-core OMAP4 processor. With 50% more raw computational power, ARCHOS G9 tablets have the power needed for a great Android experience.
Multitasking with Honeycomb: By combining the power of the 1.5 GHz OMAP4 dual-core processor with Android 3.1 ‘Honeycomb’, multitasking has never been smoother on an ARCHOS. Switching between your open apps at the flick of a finger, with dozens of open web pages or flash videos, your ARCHOS G9 tablet has the power under the hood to handle it all with ease.
A faster web experience: With the 1.5 GHz OMAP4 processor the ARCHOS G9 tablet brings you a faster web experience, loading web pages faster than on the iPad 2 or nVidia Tegra2 powered tablets*. ARCHOS G9 tablets also include Adobe Flash 10.3 support for the full web experience.

Making 3G an option: Because you shouldn’t be forced to choose between a 3G and a Wifi tablet at purchase, ARCHOS have developed the ARCHOS G9 3G stick; a patented solution letting you add a 3G module to your ARCHOS G9 tablet whenever you feel like.
Standard PC 3G stick: Though designed with ARCHOS G9 tablets in mind, the 3G stick is fully compatible with any Mac or Windows PC. With a simple Plug and Surf interface thanks to the onboard drivers, you can share your 3G stick between your devices using just one data plan.
Designed to fit perfectly into G9 tablets: The 3G stick has been specially designed to fit perfectly into the back of any G9 tablet. Just remove the cover and slide in the stick. With no protrusions once it’s inserted, it’s immediately detected by your tablet, unleashing the full portability of your ARCHOS G9 Tablet.
Affordable 3G Module, affordable 3G data plans: Whilst most other tablets average a 120€ upgrade to a 3G model and only at purchase, ARCHOS is bringing you the G9 3G stick for just 49€ as well as the choice to add it to your G9 tablet later should how you use your tablet change. Accepting any standard SIM Card, the ARCHOS G9 3G stick comes with the optional ARCHOS Connect SIM card*, bringing you affordable pay-as-you-go and subscription data plans for your connected devices, and letting you add more credit straight from your G9 tablet or Laptop.

Flash and Hard-drive models up to 250 GB

Storage knowhow: ARCHOS have taken their 10 years of experience with hard drive multimedia players and combined it with their Android know-how to bring you G9 Tablets with up to 250 GB of storage. And ARCHOS are the only manufacturers able to do it.
Flash for portability: ARCHOS’ G9 tablets with hard drive storage are only 3 MM thicker than their flash counterparts. And with the flash version weighing only 450g your tablet truly is portable.
Enough space for full HD: With a film in full HD 1080p weighing in at 8GB, the 250GB ARCHOS G9 tablets give you enough space to store over 40 hours of films in full HD.

Specially designed for tablets: Android 3.1 ‘Honeycomb’ is specially designed and optimized for tablets, giving a full web experience for on-the-go web browsing, communication and applications. With Adobe Flash 10.3 support for the true web experience and the constantly growing number of apps in Android Market, ARCHOS G9 tablets are your versatile tool for your connected life.
Android Market: ARCHOS G9 tablets will include access to Android Market. With over 200 thousand applications available to download, whether you’re after games, news, tools or widgets to personalize your Honeycomb experience, there are plenty of apps to make your ARCHOS G9 tablet your own.

Google’s suite of applications: ARCHOS G9 tablets come with Google’s suite of mobile applications including Google Talk with video chat, Gmail, Youtube, Google Maps with Street View and Navigation (beta) and Google Calendar.
Preinstalled apps to get you started: To help you get started ARCHOS preinstalls some of the best and most useful Android applications onto G9 tablets. Picsel Office Suite lets you turn your G9 tablet into a tool for work, Brief Me brings all your facebook, twitter and news feeds all in one place with a home screen widget and Evernote is the perfect aid to daily life with cloud note taking. Not forgetting Angry Birds from Rovio to let you game on your G9 tablet immediately once you take it out of the box. And, of course, you can download thousands more games and apps from Android Market. 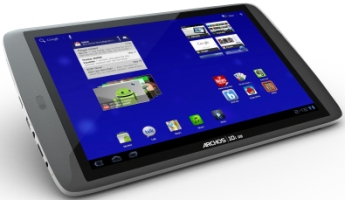 Onida G750D is a Triple SIM (GSM+GSM+CDMA), 2.0″ TFT display Mobile phone. FM Radio, VGA camera, Video player and Audio Player are the Multimedia features. It has connectivity options like Bluetooth and GPRS. Indian Calendar, Mobile Tracker and Torch Light are the other features of this device. External memory can be expanded upto 8 GB with microSD card support. It also supports integrated MSN, Yahoo and Facebook. […]