According to the Telecom Subscription Data as on 30 September 2010, released by TRAI (pdf), the number of telephone subscribers in India increased to 723.28 Million at the end of September 2010. 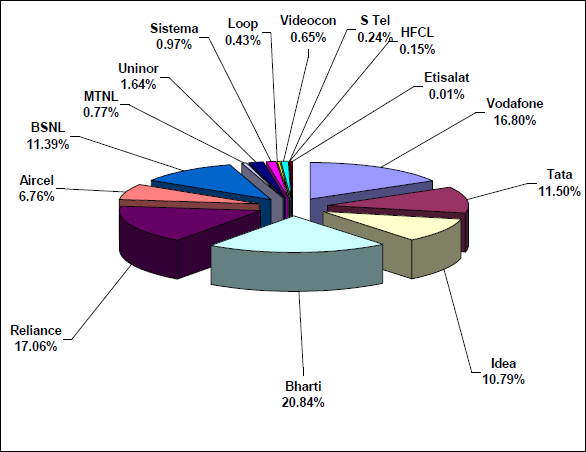 Home Location Register (HLR) is a central database that contains details of each mobile phone subscriber that is authorized to use the core network. The HLRs store details of every SIM card issued by the mobile phone operator. Each SIM has a unique identifier called an International Mobile Subscriber Identity (IMSI) which is the primary key to each HLR record. The HLR data is stored for as long as a subscriber remains with the mobile phone operator. HLR also manages the mobility of subscribers by means of updating their position in administrative areas. It sends the subscriber data to a Visitor Location Register (VLR).

Visitor Location Register (VLR) is a temporary database of the subscribers who have roamed into the particular area which it serves. Each base station in the network is served by exactly one VLR, hence a subscriber cannot be present in more than one VLR at a time. If subscriber is in active stage i.e. he is able to send/receive calls/SMSs he is available both in HLR and VLR. However, it may be possible that the subscriber is registered in HLR but not in VLR due to the reason that he is either switched-off or moved out of coverage area, not reachable etc. In such circumstances he will be available in HLR but not in VLR. This causes difference between subscriber number reported by the service providers and numbers available in VLR.

Bharti Airtel plans to have 1,000 WiFi hotspots in India by the end of 2010. This facility will initially be available only for existing Airtel broadband customers. Airtel WiFi hotspots will be located at leading premium hotels, hospitals, chains of restaurants, coffee shops and corporate buildings that are the hub of corporate, community and social activities. […]

Airtel is likely to buy Indian wireless broadband business license from Qualcomm, valued around $1.2-1.3 billion, with a premium of 25-30%. Qualcomm has broadband wireless licences in four circles of Mumbai, Delhi, Kerala and Haryana and had paid $1.05 billion for the permits. […]

SBI and airtel have entered into an agreement to make available banking services through Airtel’s Customer Service Points all over India. Airtel mobile customers will be able to avail banking products and services available at the CSPs. SBI customers will also get the services. […]